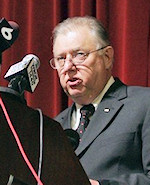 Northern Illinois University President John G. Peters announced today that he will step down June 30, 2013, closing the book on 13 years of leadership as the university’s 11th chief executive officer. Peters made the announcement during his annual State of the University Address, held inside historic Altgeld Hall.

“I can’t express in words my love for this university and its people – for its faculty, staff and students who every day invigorate and inspire me,” Peters told the audience. “We’ve shared triumph and tragedy, and in some ways, I feel we’ve experienced an entire lifetime together. But a university presidency isn’t a lifetime appointment.” Watch the video below.

Known as “The Student’s President,” Peters has built a remarkable legacy that will shape NIU far into the future. His Vision 2020 Initiative positions NIU to become the most student-centered public research university in the Midwest by establishing and achieving strategic goals for the coming decade in areas of student, faculty and facility excellence.

When Peters assumed the NIU presidency June 1, 2000, he embarked on a mission to bring new recognition and expanded resources to the university.

Under his guidance, NIU was admitted to the nation’s most prestigious public university association, the Association of Public and Land-grant Universities, an honor reserved for the top 5 percent of universities nationwide.