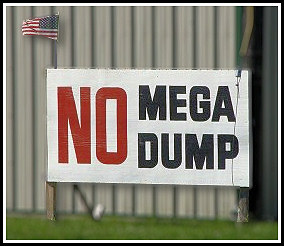 All township electors are urged to attend an informational meeting regarding the legal status of the landfill expansion appeal on Thursday Nov. 15, 2012 at the Cortland Lions Club Shelter from 5:45-7:00pm. A township elector is any registered voter who resides in an Illinois township.

The citizen group, Stop The Mega-Dump, was formed in accordance to the given rules in opposition to the expansion siting application and the process used by the DeKalb County Board to approve a 17 county regional landfill. This expansion was approved over the objections of the Cortland Township Board of Trustees and later by recorded vote of the Cortland Township Electors at their Annual Meeting as governed by 60 ILCS 1/30-120

Sec. 30-120. Garbage. The electors may prevent the deposit of night soil, garbage, or other offensive substances within the limits of the township. This Section does apply to refuse disposal facilities regulated by the Illinois Department of Public Health and the county in which the facilities are located.
(Source: P.A. 82-783; 88-62.).

The nearest municipal corporate authority to the landfill, the Town of Cortland, signed an agreement that offered, if the expansion was approved, $1 million plus other financial considerations on conditions that included not objecting to the expansion or helping anyone who might object.

According to landfill siting application rules STMD has filed objections and appealed to the Illinois Pollution Control Board and the Illinois Appellate Court. Those appeals have been denied.

The Appellate Court delivered its decision just before the November 6th election. STMD was given 21 days to file an appeal with the Illinois Supreme Court. The Nov. 15 meeting will discuss the options available.