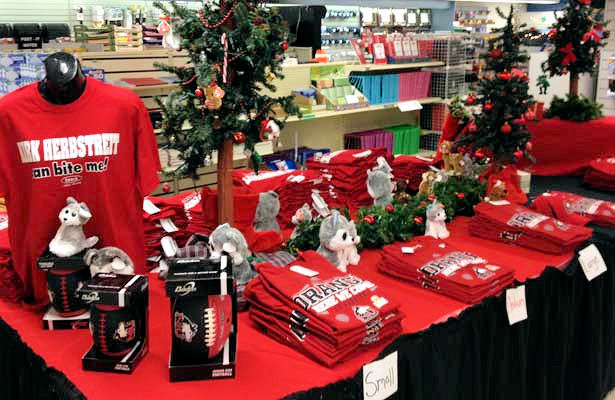 Although employees of the University Bookstore are accustomed to December shoppers hunting for Christmas gifts among the NIU Huskie gear, they’ve never seen a December like this.

With the football team’s second consecutive Mid-American Conference championship and a New Year’s Day berth in the Discover Orange Bowl, there’s plenty of new merchandise on the racks and plenty of additional customers scooping it up.

The store is selling T-shirts and sweatshirts commemorating the MAC championship game and heralding the looming national TV appearance versus Florida State. Hats related to both games are expected on the shelves any day.

“Our walk-in traffic is probably three to four times normal,” said Don Turk, manager of the bookstore in the basement of the Holmes Student Center. “We have lot of staff people coming in; they all get discounts of 10 percent. We have lots of kids coming in before they take off.”

Internet sales and telephone orders both have soared nearly 500 percent in recent days, Turk added. “It’s coming from all over the country, wherever there are NIU people,” he said.

Photo of a stack of black NIU footballs for sale at the University Bookstore.For staff, he said, the extra traffic is a treat.

“It’s nice. This is usually a kind of quiet time of year; people buy Christmas stuff, but it’s not tremendous,” he said. “Now, anyone who likes NIU is buying something with ‘NIU’ on it. It doesn’t matter if it’s Orange Bowl or MAC championship. We’ve been to bowl games the last few years, but we haven’t seen anything like this. The Orange Bowl is a big deal.”

Hours are 8 a.m. to 4:30 p.m. Monday, Dec. 17 through, Friday, Dec. 21, when the store closes for the winter break; the website will remain open, but employees cannot process orders until they return in January.