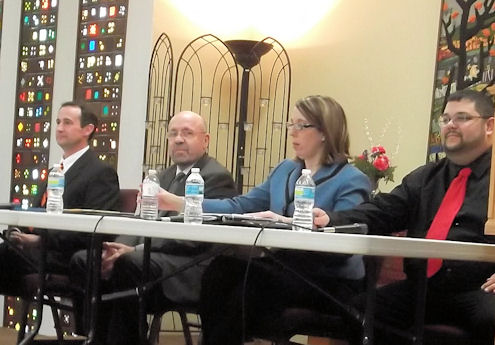 About 75 people showed up to the Democratic Mayoral Debate Forum hosted at the Unitarian Universalist Church on Thursday evening, February 21st. Democratic Chairman Mark Pietrowski said that even though the Democrats organized the forum, the party is not endorsing any candidate, as the mayoral race is a nonpartisan race. The event focused on only the DeKalb Mayoral race, allowing more time for local issues to be discussed between the four candidates running for office.

The proposed DeKalb Library expansion was the focus of at least two of the questions proposed from the audience. To the first question, both Jennifer Groce and Dave Jacobson felt that while the expansion was necessary, the 7.5 million in bond debt the library was asking of the City would max out all borrowing capability, putting the City into a dangerous situation if any other emergencies should arise. Mike Verbic suggested that the library reduce it’s funding expectations to $17 million immediately, and find a way to add on later if additional funding or donations come in.  John Rey stated that the library had already reduced it’s goals from 60,000 to 47,000 square feet and now the City should honor the request.

All of the candidates, except Rey, expressed concern on the recent announcement from the library that they are seeking a bank loan to cover the $6 million in donation needed by June so it can qualify for an $8.5 million state grant.  Jacobson warned that DeKalb was going down the same path that got Sycamore in trouble with taxpayers. He reminded the audience that when pledges did not turn in to real donations the taxpayers were responsible for making up the difference with a sizable tax increase. Verbic again reiterated his feelings that the library needed to reduce it’s total goal to $17 million to start out. Groce, concerned that the library not lose its state grant, suggested that if the library could secure the $6 million from the bank, that option should be at least looked at. Rey stated that the City needed to cooperate with the library so that they could build the entire $24 million dollar project.  In rebuttals, Jacobson reminded the audience that the City would not be paying that bill, it would fall upon the taxpayers to do so. Rey countered that the Mayor needed to make that decision for the people.

Concerning a South side TIF, Rey felt that the City should not let current TIF’s expire until they look in to transferring money between the TIF districts, to jump start the new TIF area. Groce stated that there is already a plan, EPA can help with the Protano property cleanup but the City needs to decide beforehand if they want TIF to focus on economic development, revitalization or streets and infrastructure for the South side TIF. Jacobson  suggested the City not repeat what he calls the ‘mistakes of downtown’  and spend TIF money on things like aesthetics (sidewalks) and government buildings (referring to schools on S. side). He would prefer South side TIF go towards economic development in some manner. Verbic stated that the success of any TIF is property taxes in the area going up and that this is not happening now in the current TIF districts. He felt that the City should wait until other TIF districts expire before starting another.

On the topic of coordination with NIU, Groce reminded the audience that we have a ‘once in a lifetime’ opportunity with NIU getting a new President and Chief of Police, and DeKalb getting a new Mayor and Chief of Police, all at nearly the same time. While all candidates agreed that the City and NIU need to start coordinating their plans for the future, Groce reminded the audience that HOW the City was going to encourage NIU to participate should be the public’s next question.

The forum was well run and concentrated on only the Mayor position. That allowed for more in-depth questions and answers and a better understanding of the candidates’ positions. Thanks to Mark Pietrowski and Dan Kenney!

I liked the candidate’s opportunity for a rebuttal. That was a positive way for candidates to distinguish themselves from each other.

I was encouraged by the turnout for a first time event. Ever the optimist, I’m hoping that means DeKalb’s citizens care about this election and election day turn out will be record breaking!