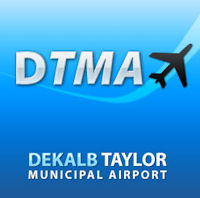 The City of DeKalb received notice that the Illinois Department of Transportation’s Division of Aeronautics has selected DeKalb Taylor Municipal Airport as the 2013 General Aviation-Public/Category A Airport of the Year. Criteria is based on, but not limited to, cooperation with the DOA and the FAA, the Airport’s safety record, and maintenance of the facility.

The award will be presented on Thursday, May 16, 2013 at 12:15pm during the Illinois Aviation Conference Luncheon ceremony at the Radisson Hotel in Moline, Illinois.

Mayor John Rey noted “I am very pleased to learn of this recognition for the job done by City staff in the operation of the DeKalb Taylor Municipal Airport for 2013. This operation is led by Airport Manager, Tom Cleveland, who along with all the Airport staff, Airport Advisory Board and citizens of the community can be very proud of the quality services that are provided through the Airport operation. We have a quality, dedicated group of individuals who are dedicated to deliver high quality service, which is recognized by the state Division of Aeronautics for a job well done”.

Robert Owens, Airport Advisory Board member and Airport Commissioner “feels this award is a very special award to receive for many reasons. We have been fortunate enough to be multiple recipients of this prestigious award; however, this one in 2013 is very, very, special since we overcame many obstacles. This award would not have been possible without the confidence and help we receive from our elected and other City officials and employees, and with Tom, as usual, putting the right pieces in the right places at the right times to make DKB work as efficiently as possible. To the City population, volunteers, our tenants, and all associated with DKB, thanks to every one of you and be proud of your 2013 General Aviation Airport of the Year”.

Alderman Ron Naylor agrees. “It is a great honor for DTMA to be recognized again with this award. The recognition speaks well for the Airport, the City, the City Council, and community’s on-going support. Special recognition should go to the Airport Manager, the supporting Public Works personnel, the Airport Advisory Board, and the aviation community for all of their hard work and effort over the past several years that has made the Airport one of the state’s finest”.