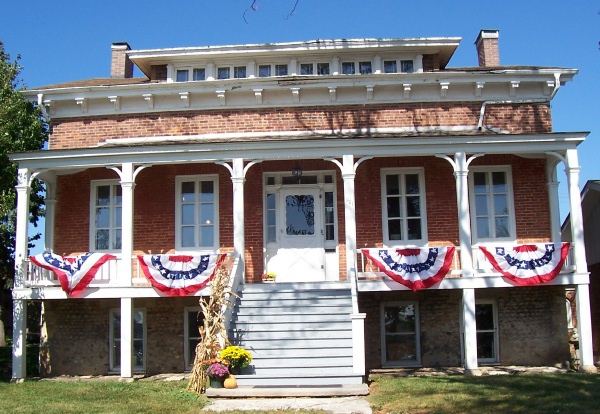 All-aboard for Glidden Homestead’s railroad programs! Railroads played a key role in shaping the future of many Illinois communities, including DeKalb. To commemorate Joseph F. Glidden’s part in bringing the railroad through DeKalb in 1853, the Glidden Homestead & Historical Center, dedicated to preserving Glidden’s legacy, will offer special programming on Saturday June 23rd as well as July 14th and 28th.

The programs are among others that will be held throughout the year to celebrate the 200th anniversary of Glidden’s birth. Railroad enthusiasts, Bill Cummings of DeKalb and Rich DeMink of Downers Grove, are featured presenters during the Glidden Railroad Days programming.

On June 23, at 1 p.m., Cummings will present “19th Century Chicago & Northwestern Railroad Development in DeKalb.” Starting with a Lionel O gauge model train when he was very young, Cummings has been a rail fan most of his life. His love of the Chicago and Northwestern stems from having been born in a CNW town (Neenah, WI) and having lived in three other CNW towns: Evanston, Mt Prospect, and DeKalb. He is collector of CNW memorabilia and CNW HO model trains. He is a member of the Chicago and Northwestern Historical Society, the Illinois Railway Museum, and the Blackhawk Model Railroad Club in Oregon, IL.

DeMink was employed in the freight rail industry for 27 years and the passenger rail industry (Amtrak) for five years. His career was in the costing and budgeting area and he retired in 2001 from Amtrak. Since then, he has enjoyed volunteering in the NPS/Amtrak Trails to Rails Program where as a volunteer docent he rode Amtrak trains such as the Empire Builder in the summer months. He gave interpretive programs in the lounge car of that train. Currently, he is involved with the set up of another program on Amtrak’s SouthWest Chief. DeMink’s wife, Sarah Glidden DeMink, is the great-grand-niece of Joseph F. Glidden and a member of the museum’s board of directors.

The schedule of activities includes: on July 14 and 28, at 1 and 2:30 p.m,  a display of an early 1900’s HO model steam train, a 30-minute video “Song of the Pioneer” will be shown. It covers the founding of the Chicago & Northwestern Railroad and its early development building westward from Chicago. The video was produced for the centennial of the CNW in 1948.

The Glidden Homestead is the site where Joseph Glidden invented and manufactured “The Winner” barbed wire, for which he received a patent on Nov. 24, 1874. The house and barn built in the 1860s still stand on their original sites. Both are listed on the National Register of Historic Sites. Everyone is encouraged to visit the Glidden Homestead this season at 921 W. Lincoln Hwy., DeKalb, between Copy Service and Burger King. The Homestead is open for tours on Tuesdays, 10 a.m.-2 p.m., and also the second and fourth Sundays each month through October, noon-4 p.m., with special events in November. Admission is $4 for ages 14 and older; under age 14, free. Members are admitted free, with a variety of membership levels available. Memberships play a key role in the not-for-profit organization’s preservation efforts. For more information, call (815) 756-7904 or visit www.gliddenhomestead.org. Additional Information: Between Burger King and Copy Service on West Lincoln Highway, DeKalb