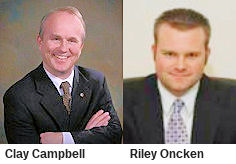 The March 2014 primary race offers few contested races for seats on the DeKalb County Board and countywide offices.

At least until Friday the 13th of December there are contested races for three of the 12 seats on the county board. Objections were filed against the candidate petitions of Clay Campbell-R, running in District 3 against appointed incumbent Riley Oncken-R, and Laurie Emmer-R, running against incumbent Anthony Cvek-R in District 4.

According to a Daily Chronicle report Oncken objected to Campbell’s petition because the address listed on Campbell’s voter registration is not within District 3.  The objection to Emmer’s petition alleges one of the 19 minimum required signatures on her petition is from someone outside the district.

DeKalb County Clerk Douglas Johnson-R, DeKalb County State’s Attorney Richard Schmack-D and DeKalb County Circuit Clerk Maureen Josh-R (or someone from their office) are the election judges for the Friday the 13th hearing on the objection petitions.

Samuel-Louis Bandy, Jr.-R and Craig J. Genteman-R will have a contest in the March primary race for District 9. No objection petitions were filed. Jim Luebke is the lone Democrat

Joshua Orr-D from Cortland will face the winner of the Oncken-Campbell contest in District 3 if Johnson, Schmack and Josh decides in Campbell’s favor. Joe Bassett-D awaits the winner between Cvek and Emmer in the November general election.

Appointed incumbent Douglas Johnson-R will face either Trent Taylor-D (DeKalb) or Sandwich city clerk, Denise Li-D in November. The DeKalb County Clerk and Recorder is the only contested countywide race on the March primary ballot for Democrats.

The two established political parties often caucus to fill vacancies for county races where there was no candidate on the ballot in the primary race. With this method, the chairman of the central committee of a party calls a meeting to choose who they want as their party’s candidates for the various offices.

All for one, one for all