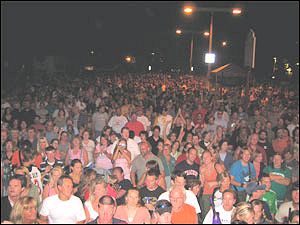 “We are pleased to have Corn Fest move back to the downtown,” announced former City Manager Mark Biernacki. “We were grateful that the [Corn Fest Committee] and the community graciously allowed the temporary relocation of the fest to the airport while the major renovations were underway. With that project now complete, we can now welcome the fest back to our new and improved downtown.”

News from that February press release made a lot of DeKalb County Online readers happy. It was feared the festival had found a permanent home at DeKalb-Taylor Municipal Airport. About 450 shared the story and almost all were accompanied by a smiley face. 🙂

The festival returned in 2013 and seemed well attended when weather permitted. A Gracie Mott Reporting on the Spot video captured a sudden windstorm that wreaked havoc on the booth tents. It also captured more than 2800 views on DeKalb County Online’s YouTube channel.

Preserve Our Neighborhoods questions timing and placement of agenda item