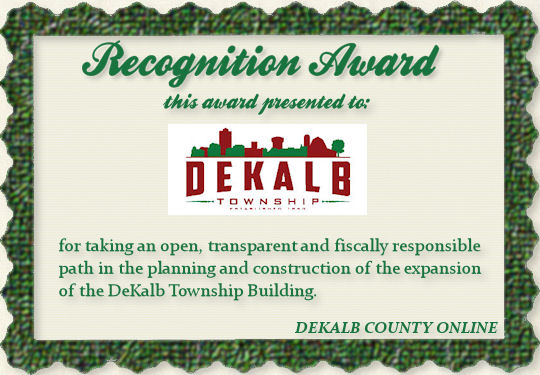 In the course of events surrounding the construction of local public facilities, residents and taxpayers should take note when the bottom line falls below $1 million, no debt bonds are issued and most of the project costs are paid for from designated funds accumulated for that purpose. 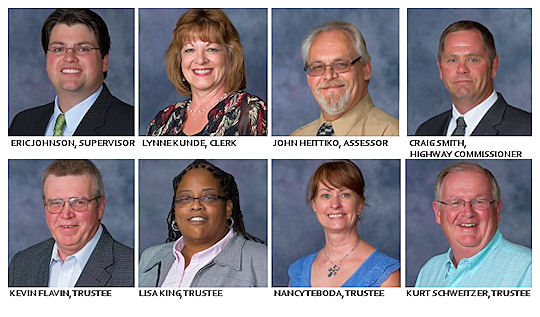 DeKalb Township is adding garage space and small offices to the building at 2323 S. Fourth St., scheduled for completion in April 2014.  The building was built in 1989. The $850,000 project includes replacing the heating, air conditioning and ventilation system with modern energy-efficient units.

The final approval to send the project out to bid took place in May 2013.

An $850,000 publicly financed expansion is a utilitarian project to serve the immediate needs of the current population. It is not a visionary undertaking for generations to come (and pay for).

This plan addresses issues today and is financed accordlingly with real time economy considered. As such it deserves recognition.

Q. Who ended up getting the bid?

A. The winning bid went to Larson and Larson Construction (see agenda and minutes)

Q. Will any debt bonds need to be sold?

A. Debt bonds will not be needed. Township law allows us to do short-term borrowing through reputable banks. We did meet with all of our local banking partners and requested some numbers if we needed to borrow. The board approved NB&T as our bank of choice should we need to take a loan to ensure we keep proper cash flow and moneys on hands. They offered the best interest rate (under 3%).

When the project was started the board approved up to $400,000 of the project to be borrowed. Since the bid came in lower than expected we anticipate needing to borrow under $200,000. This project could be done all in cash reserves, but after many meetings and discussion we decided that draining our entire cash reserves would be financially unsound and are opting to do some small short term borrowing to make sure we can handle any unexpected expenses.

We plan on having any loans paid off in 3-4 years. The township prides itself on our long history of fiscal prudence and plans to keep that track record in place.

Q. How will the new digs make things easier or more efficient for township officers, trustees and residents?

A. Shortly after taking over as Supervisor I decided that the township needed to do a long term space analysis. It was clear to me that we had outgrown our space and I was aware that the former Highway Commissioner was planning a garage addition. I met with him and the Assessor (John Hietikko) to discuss the possibility of doing a larger expansion and to add more office space as well. We went through the long term needs of the different departments and each department will see benefits from this project.

The Highway department is getting additional garage space and will now be able to house all of its equipment indoors. This will extend the life of the equipment since it will not be exposed to all the different weather conditions and will reduce the likelihood of vandalism or theft.

The Assessor’s portion of the building had only one office. With the new space residents will be able to meet in private with the staff to discuss issues relating to their assessments. The assessor’s office is often involved with development projects and needs to meet with larger groups of people. John’s office could only sit 3 people and we had no conference room for larger meetings. His new office will hold larger group meetings and we have space in the new board meeting room for large meetings. Storage was also an issue as he keeps physical records on all 12,000+ pieces of property in the township.

General Assistance was in the greatest need of additional space. One of my caseworkers had to meet in an open area next to the door when working with clients. The information we take as well as who is meeting with us is confidential. Getting both caseworkers into offices where they can meet in private with clients was a must. We had also run out of room for record storage and had bankers boxes piled all over the building.

We are also adding a larger board/conference room which will allow the Trustees and public to have more space to talk and allow for us to host larger meetings. It will also give trustees a place to work if they want to be in the office or to meet with residents.

A. As we’ve moved along with the project we are discovering problems that would have started popping up over the next few years. The furnace was original to the 1989 building and was starting to give out and the cooling units were on their last leg as well. We would have needed to replace them in the near future. The north wall of the building was never insulated, something we just found out and explains why that side was always too hot or cold. The brick on the front of the building was starting to crumble because the space between the brink and building had separated and water had been getting in for years. This project is going to correct those problems and suit our needs for many years to come.