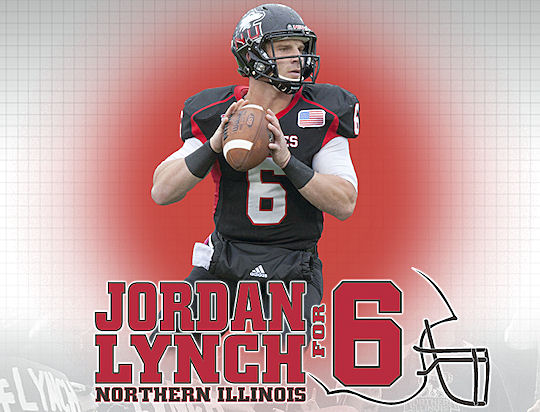 Attention all Monday morning football defensive coordinators. Your next opponent has a longshot Heisman Trophy candidate on its roster. Quick quiz. Who do you key your defense on?

On December 9, 2013, Jordan Lynch became the first NIU Huskies player ever announced as a finalist for the Heisman Trophy. He finished third in the voting. On December 17th, Lynch was selected as a first team All-American. That puts Jordan Lynch in the same category of MAC legends as Randy Moss.

On October 19, 2013, Lynch broke the NCAA record for the most rushing yards by a quarterback in one game, finishing with 316 yards and three touchdowns, en route to winning the Walter Camp National Player of the Week.

On October 26 against Eastern Michigan, Lynch was responsible for six total touchdowns, throwing four, running for one, and catching a touchdown, gaining 339 total yards.

He also threw for 6,209 yards in his NIU career to go along with 51 TD passes (against only 14 interceptions) and 48 rushing TDs.

This unofficial official video of the Jordan Lynch for Heisman campaign has all 44 of his 2012 touchdowns. Enjoy.

Preserve Our Neighborhoods questions timing and placement of agenda item