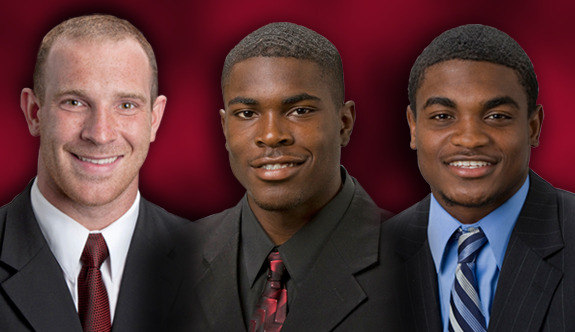 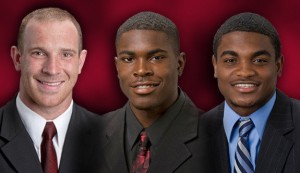 Northern Illinois University quarterback Jordan Lynch and safety Jimmie Ward continued to add to their already impressive legacies at NIU Tuesday when they were named first team All-Americans by the Associated Press and SI.com, respectively, making them just the second and third first-team honorees in school history.

Lynch, who finished third in the 2013 voting for the Heisman Trophy as the nation’s most outstanding player, also earned second team All-America recognition at quarterback from CBSSports.com and was an honorable mention signal-caller on SI.com’s list. Ward added third-team AP All-America honors, giving the Huskies two players on the AP team for the first time and making him the first NIU defender to garner AP first, second or third team recognition. NIU wide receiver Tommylee Lewis was also recognized by SI.com as an honorable mention All-American as an all-purpose player.

“I think it’s fantastic,” he said. “Jordan can do everything, so I won’t disagree [with his selection as an all-purpose player], and the way Jimmie has played this year has been incredible. He’s definitely a first team All-American in my book.”

Lynch is the first Huskie player to be named to the AP first, second or third team twice; he was the AP’s second team all-purpose player a year ago.

The only Heisman finalist in school history who recorded the highest finish by a Mid-American Conference player, Lynch turned in a record-setting season in his final campaign at NIU. He twice set the NCAA record for rushing yards by a quarterback with 316 and 321-yard outings versus Central and Western Michigan respectively. The Mt. Carmel product threw for 2,676 yards on 233-of-369 passing, while his 1,881 rushing yards are second in the country.

He is only the fifth player in NCAA history to have 20 rushing and 20 passing touchdowns in a season with 22 and 23 respectively, and has broken the NIU single season record for touchdowns scored. He was named the MAC’s Vern Smith Leadership Award winner as league MVP for the second consecutive season and is a finalist for the Manning Quarterback and Senior CLASS Award.

A native of Mobile, Ala., Ward tallied a team-high 89 tackles, 57 solo, and a career-high six interceptions to lead the MAC and tie for 13th in the country. The Davidson High School product broke up 14 passes, and registered 2.5 tackles for loss, one sack and one fumble recovery. His interception at Iowa set up the game winning field, while his 61-yard interception return for a touchdown helped NIU to a 55-24 win at Purdue. Ward earned first team All-MAC honors and will be playing in the 2014 Reese’s Senior Bowl.

Lewis, a junior, is NIU’s leading receiver 80 receptions for 660 yards on the year. He ranks 14th in the country in catches per game with 7.3 and is averaging 122.7 all purpose yards a game. In addition to his receiving yardage, The native of Riviera Beach, Fla. (W.T. Dwyer H.S.) ranks third on the Huskie team in rushing with 356 yards on 28 carries and returned 11 kicks for 312 yards, including a 99-yard touchdown return at Purdue.

The Huskies close out their 2013 season Dec. 26 when they face Utah State in the San Diego County Credit Union Poinsettia Bowl. Kickoff is set for 8:30 p.m. CT at Qualcomm Stadium and will be broadcast on ESPN. To purchase tickets or travel packages to the game, go NIUSportsTravel.com. For more information on the game, check out Poinsettia Bowl Central on NIUHuskies.com.