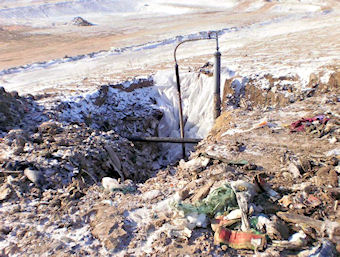 The Illinois EPA report on their investigation of the gas or smell leak that sickened more than 70 students and staff at Cortland Elementary School provides more answers for Cortland parents and teacher at the school.

On January 14, numerous individuals including children and teachers at Cortland Elementary School were taken to the hospital for sumptoms which included nausea and headaches after reporting a strong, unusual odor.

Mike Hey, manager of the DeKalb County Landfill told Donna Shehane with the Rockford regional office of the IEPA that at about 10:00-10:15am an employee of Cortland Elementary School came to the landfill office and reported a odor problem at the school.

An independent contractor, Midwest Drilled Foundation, was excavating in an 80′-100′ area. A deep trench was dug near a gas well and Steve Jakes, the landfill’s Gas Operations Manager reported a strong odor when the digging took place. The gas collection system had not been shut down or scaled back due to the work being done.

H2S monitors were set to call in a warning if levels reached 5ppm and were flashing “zero,” according to Hey. He also reported that methane monitors in the buildings on-site were not triggered.

The weather was recorded as 28 degrees F, with winds at 13 mph out of the southwest. Two loads of declassified special waste was received at the landfill on January 14. Ten cubic yards of foundry sand and 24.7 tons of municipal biosolids (or “Sewage Sludge” refers to the solids separated during the treatment of municipal wastewater).

The IEPA has requested the waste profile and analytical testing data for the biosolids, the review of which is pending.

According to a report filed by Chris Fioretto, a Captain/EMT with the Cortland Fire Department the alarm was called at 10:45am and fire dept personnel arrived on the scene at 10:52am.

Upon arrival the fire dept crew noted a slight odor outside of the school. Crew investigation show no CO, no flammable gases, no H2S and oxygen was at 20%.

A triage was set up and any students with a complaint were sent to the library  for tirage and treatment.

Per Kishwaukee Community Hopsital’s ER unit all patients with elevated spCO readings from the RAD 57 meter had to be transported by ambulance for oxygen treatment.

Command requested EMS box 2150 to the 3rd alarm for 49 patients needing transport. Two signed release forms and were not transported. All patents were treated and released from KCH by 5pm.

Maintenance staff at Cortland Elementary School told Shehane and Fioretto that the fresh air intake louvers were closed when the strong odor was detected but reopened just before emergency responders arrived. When outside air enters a building carbon monoxide can dissipate and create a lower reading than the original level.

It is important to note that none of the gas detection meters at the landfill or the school logged any measurable levels of methane, carbon monoxide or H2S in terms of parts per million the day of the event or the day after. H2S monitors at the landfill are set to call in an alarm if levels reach 5ppm.

The H2S monitor at the school logged low levels of H2S in parts per billion. According to data obtained from the Freedom of Information Act at 8:49am the H2S level at the school was 0.9085(ppb). At 9:49am, just before the incident the level was at 0.8803 (ppb).

The concentration of H2S in the air you breathe ranges generally from about 0.11ppb (parts per billion, 1000 ppb = 1 ppm) to 0.33 ppb, according to the Agency for Toxic Substances and Disease Registry (ATSDR)

According to the ATSDR several published research studies have concluded that chronic exposure to hydrogen sulfide can result in adverse human health effects ranging eye irritation, a sore throat and cough, shortness of breath, and fluid in the lungs. These symptoms will usually subside within a few weeks, but other changes such as memory problems may occur. Inhaling H2S on a long-term basis may result in fatigue, loss of appetite, headaches, irritability, poor memory, and dizziness.

The IEPA report found the landfill to be out of compliance because malodors attributed to it were detected beyond its boundaries. Waste Management now has 180 days to submit to the IEPA an application for a significant modification that either proposes a gas collection/management system or demonstrates that the facility is not the cause of the occurrence.

The work resulting in the excavation near a gas well is not complete. Waste Management told the IEPA that the project would take two weeks to complete but because they were going to pay much closer attention to the weather and wind conditions the schedule would be curtailed.

The report did not indicate whether Waste Management would notify District 428 or the Cortland Fire Department of the new schedule.