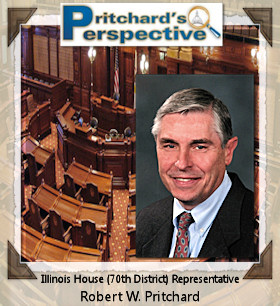 In case you missed the State of the State Address by Governor Pat Quinn last week, he reviewed the progress that has been made over the past five years under his leadership to end corruption, restore financial stability and make tough decisions. It might also be called a campaign speech that looked backward more than forward.

Response from legislators was polite and attentive until the Governor left the chamber when one after another Representative rose to correct some misstatement or inaccuracy that the governor had made. There were a lot of issues that the Governor failed to mention altogether like the expiring income tax, how to attract good paying jobs to Illinois and encourage citizens and businesses to stay and invest in Illinois.

Actually, I was surprised he proposed to cut fees like the small business licensing fee from $500 to $39, create a new small business advocate within his administration, and study the challenges of manufacturing in Illinois. I anticipated that he would want to expand programs, increase spending, and raise the cost of doing business in Illinois but I underestimated his enthusiasm to “keep digging” the financial hole we are in.

The Governor’s claim that Illinois has turned the economic corner is unfortunately not borne out by the facts. The state’s jobless rate is nearly two points higher than the national average and Illinois ranks dead last among all states in projected job growth for 2014. Our list of unpaid bills at the end of the fiscal year remains unchanged from last year at about $6 billion despite higher state revenue. Illinois has the third largest outward migration of any state, clearly indicating that people are leaving for “greener pastures.”

As he proposed, I would certainly like to see more monetary assistance for college students, investing in early childhood education and improving our infrastructure especially after how hard this winter has been on our roads. However, the state is broke, income taxes are supposed to roll back next year and the Governor had no proposals to increase efficiency, cut waste and fraud, or shift spending priorities.

I for one, believe Illinois can raise itself from the bottom of nearly every economic scale, restore public optimism and rebuild the middle class but it will take a more focused, creative, and fiscally responsible plan than we heard from the Governor last week.

This week the joint committees of Government Administration and Revenue and Finance will hold its second hearing on business taxes and incentives. The committees are gathering data on how Illinois stacks up with other states, how current programs are working, and what might improve our competitiveness.

One of the groups giving further details and statistics is the Commission on Government Forecasting and Accountability which just released a study on Illinois Tax Incentives. You can review the report on their website: http://cgfa.ilga.gov.

The state can no longer deny that changes have to be made in our business taxes, incentives, and regulation. Both a report by United Van Lines and a study by the U.S. Census Bureau independently conclude that Illinois is quickly losing residents and businesses. The Governor’s proposals to increase the minimum wage, require paid sick days for workers, and continue regulations as usual only make our business climate less attractive.

Perhaps in response to the Governor’s negative proposals for business, mounting pressure for business reforms, or the number of Midwestern states who have recently cut taxes, Speaker Madigan last week proposed cutting corporate income taxes in half. Such a cut would reduce state revenue by $1.45 billion this year but help our businesses compete.

The Speaker’s proposal sends a signal to the joint committees that creative ideas for improving the state’s business climate could be considered. It also sends a strong message to the Governor as he prepares his budget address that he can’t count on more revenue or even the same revenue to fund his desires for increased programs and spending next year.

Two local institutions of higher education have agreed to make it easier for students to transfer course credits and earn an associate’s degree.

I was honored to join Lt. Governor Sheila Simon at the signing of the innovative agreement between Northern Illinois University (NIU) and Kishwaukee Community College (Kishwaukee) recently.

The agreement allows eligible NIU students who transferred from Kishwaukee without an associate’s degree to earn the two-year degree using credits from NIU courses. Regional and national data show that the associate degree is a valuable commodity. Employees with associate degrees typically earn an average of $7,200 per year more than employees with no post-secondary credentials- almost $600,000 more in salary over a lifetime.

Kishwaukee President Tom Choice said the reverse transfer agreement allows Kishwaukee students now at NIU to fully complete the first stage of their educational journey, giving a sense of accomplishment, indication of their academic dedication, and a demonstration to future employers and graduate institutions of their personal motivation to excel. Approximately 300 students a year are dually enrolled at both institutions.

Late last month the University of Illinois Board of Trustees announced new tuition rates for first-year students that rose significantly less than in recent years. The increase of 1.7 percent is comparable to overall rates of inflation for other consumer goods and services throughout the United States.

The base tuition rate for in-state students will increase to $12,036 for first-year students enrolled in Urbana-Champaign with additional sums billed to most students for housing, student fees, and associated enrollment expenses. Cost increases in recent years have risen so significantly many middle class families can no longer afford the cost of a four-year college degree. I am encouraged to see that many higher education institutions are looking at ways to reduce their costs, the time needed for students to earn a degree, and barriers for high school students to earn college credits from more rigorous high school courses.

Driven by the national Affordable Care Act, fire services and Emergency Medical Services (EMS) in Illinois are discussing new roles and responsibilities for out of hospital care. The concept, already implemented in other states, involves paramedics, EMT-Intermediates, EMT-Basics, Registered Nurses, and Physician’s Assistants among other health care professionals.

The goal is to reduce the cost of healthcare, hospital readmission and illness by using a mobile integrated healthcare (MIH) team. An example of how such a team might be utilized would be diverting frequent 9-1-1 users from emergency rooms to other social and healthcare services. Another would be giving flu shots at the fire station or taking intoxicated patients directly to detox centers rather than hospitals.

The Center for Medicare and Medicaid (CMS) has already begun contracting with Accountable Care Organizations to pilot the program. The ACOs are assigned a patient population for a lump sum of money and are expected to increase wellness, direct needed health care more appropriately, and reduce repeat cases. Many in the fire service feel they have the training and capacity to play a role in this care model.

Spurred by consumer calls, legislators have prompted the Governor to issue several disaster proclamations and the Attorney General to investigate price gouging. The issue is a shortage of Liquefied Petroleum (LP) in the Midwest which is used for such things as home heating, grain drying, and fuel for certain vehicles.

A harvest of high moisture grain followed by extreme prolonged winter weather have combined to increase demand for LP this year. Pipelines and rail cars normally used to transport LP are in high demand for transporting oil from the new domestic fracking and oil fields. As a result local retailers can’t get the supply of LP they need, transport truckers wait long hours to be filled at storage centers, and prices have more than doubled from last fall.

The Governor has issued orders to allow truckers to work longer hours and wave certain license requirements. I have joined other legislators to urge the Governor to allocate additional emergency funds for low income home energy assistance, and low-interest loans to propane distributors to buy additional propane. In addition we called for a suspension of the state sales tax on LP, slowing of the export of LP, and creation of a strategic reserve of LP.

The Senate Education Funding Advisory Committee has issued its report calling for ten changes in Elementary and Secondary school funding. The recommendations are certain to create discussion among local educators and be considered by the House Education Committees this spring.

Among the proposals are to streamline the current complicated school funding formula, review the financial burden of mandates, and require districts to provide greater clarity about how funds are used. Other recommendations are to equalize taxing ability between dual and unit districts, hold districts and students to higher standards, and provide a clearer picture of a district’s ability to fund education.

The Committee has been holding hearings around the state and discussing their recommendations since last summer. There was general agreement that the recommendations would focus on getting the current distribution of funding right before focusing on the amount of state funding. The full report can be viewed at www.isbe.state.il.us.

Meanwhile the State Board of Education has shown no reluctance in asking for more funding of the legislature for FY15. Their request includes $1 billion of additional funding for General State Aid, early childhood, bilingual education, special education, assessments and transportation.

I am headed to Springfield for Legislative session Tuesday and Wednesday.