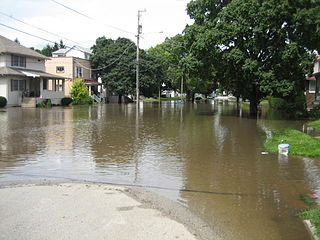 The City of DeKalb has been the topic of a great many exciting conversations in the past few months, regarding the long-term, strategic plans of the City and of other important community partners such as Northern Illinois University and local businesses and citizens.  Much of that dialogue has focused on ways of improving the collaboration between the City and University, and looking at ways to use that collaborative relationship to benefit the City and to support the connection of the downtown and campus areas.  As the City and University have both looked at that issue, it is clear that the North Fifth Ward / College-John Neighborhood are critical to the City’s future success.  The area currently faces some challenges, with floodplain and storm water issues, with the past conversion of housing from single-family residential to greater intensity/higher-density residential use, and with deterioration in some of the buildings in the neighborhood—but it also holds the promise to be a new link between the City and the University campus.

In the past few weeks, there has been some speculation about the City’s role in the revitalization of the neighborhood, and discussion regarding what the City’s participation level should be.  To date, the City has worked cooperatively with the University and local stakeholders to make some preliminary determinations about how best to address some of the long-term flooding issues that have plagued the area.  Those preliminary investigations have suggested that there are viable solutions that could address the flooding issues and render the area a safer part of the community.  The City has also been having high-level discussions with the University regarding the best method of collaborating and partnering to address community concerns, preserve the City’s heritage, and work to build a stronger linkage between the two entities.  That linkage is being considered in the physical context, with discussions regarding improvements in public transportation infrastructure, and also in the context of working to develop closer communication between the University’s leadership team and the City’s leadership team.

As a component of those discussions, the University has worked with local stakeholders to contemplate the development of a group known as College Town Partners, to promote positive redevelopment of key linkage areas between the downtown and University campus.  As an example of the new spirit of collaboration between the City and University, the City was offered the opportunity to be a full and active partner in those efforts.  According to City Manager Anne Marie Gaura, “this sort of high-level collaboration and partnership between the City and University is key to the long-term future of both entities.  The City is incredibly pleased to be sharing in this new community engagement with the University.  As we evaluate any potential project or partnership for the City, we have to evaluate the best role of the City in fulfilling our obligations as a unit of local government.  Thus, while we are very pleased to see the discussion of a possible direct partnership on community redevelopment in the College-John area, at this time, the City believes that the University is in a better position to work on a public/private partnership with the City serving as a review agency instead of as a direct partner in the project.  That the discussions of partnership have occurred at all is a sign of the increased communication and cooperation between the City and University.”

To date, the City has not entered into any agreements or memoranda of understanding regarding the proposed redevelopment or community linkage projects.  The City has seen a document publicly circulated that was entitled as a Memorandum of Understanding and which listed the City as a party to the agreement. While the City did not participate in the preparation or drafting of that document, it is encouraging to see that community partners wish to solicit such direct City involvement in projects of this nature.

The City will undoubtedly have a significant role in any such future project and will work to engage all interested parties in the community to develop a plan that addresses public safety concerns arising out of the current neighborhood configuration.