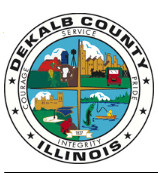 After seven years of planning and hard work, the DeKalb County Board approved the purchase of Evergreen Village Trailer Park. If you have been following this story, you know the hurdles we have encountered. I met several times with the County Administration to discuss the future of this project, and the obstacles usually dictated ending the project. Fortunately, we agreed to work past the obstacles and continue moving forward. A solid County Board of twenty-four members, wanted what was best for the residents of Evergreen Village.

Here is a very brief background on the project. The trailer park is located at 955 E. State St. near Sycamore, and owned by Frank Santoro, and is in a flood plain adjacent to the Kishwaukee River. For many years, residents of the park have been subjected to repeated flooding. Our main concern has been the safety of the residents, and also for county officials. Each time the park has flooded, there are concerns of residents drowning, disease or possibly electrocution. The county ESDA Director, Mr. Denny Miller, has done an outstanding job for years rescuing folks by boat during flood season. Mr. Miller is also the County Coroner, and my fear has been the need for Mr. Miller to act as the Coroner during one of the floods. Thankfully, he has not.

The final price agreed between the county and Santoro, is $1.6 million. The payment is part of grant funds totaling $5.6 million from the Illinois Emergency Management Agency, and Federal Emergency Management Agency. Closing is set for the end of May, with plans to begin moving residents as early as June. County officials plan on meeting with each trailer owner individually, since every trailer deal will be different. The goal is to relocate families with school-age children before the next school year.

The DeKalb County Spelling Bee is an annual event, with participants from all eight public school districts and two private schools. The original date for the Bee was February 22nd, 2014, went 3.5 hours, which translated, to seventy-four rounds and over two hundred words. The championship spell-off was held on March 8, 2014 and went only six rounds when Keith Mokry from Somonauk Middle School won the head-to-head battle. Keith was awarded an all-expense-paid trip to National Harbor, MD to compete at the Scripps National Spelling Bee. This marathon Spelling Bee received national attention, and also international attention when Sydney, Australia picked up the story. The DeKalb County Board acknowledged and commended Keith Mokry for his accomplishments, and wishes him good luck at the national competition held from May 25th, 2014 through May 31, 2014.