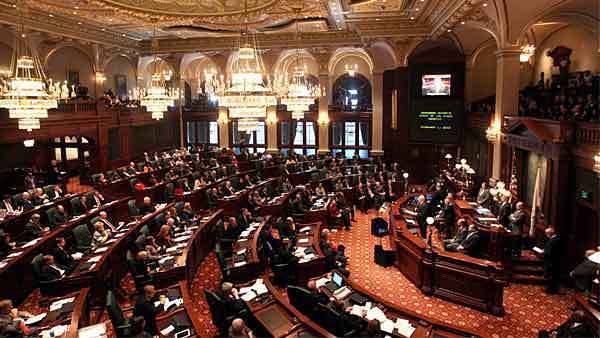 HB 3814 sailed out of the House last week directing the Board of Elections to place an advisory referendum regarding a hike in the minimum-wage on the ballot in the November 4th general election.  The bill now moves to the Senate.

The ballot vote would give the legislature guidance in the question of raising the minimum wage for adults over the age of 18 from the current $8.25 to $10 per hour beginning January 1, 2015. Since this is only an advisory referendum, many observers suggest this is a ploy to increase voter turnout and defuse voter anger should the temporary income tax be made permanent.

Illinois currently has the 4th highest minimum wage and increasing it not only hurts the competitiveness of our businesses selling products outside the state but also adds to the labor cost of public universities, colleges, park districts and other non-profit organizations.

According to the Small Business Insight Module, a leading economic forecasting tool to estimate the impact of the wage increase, Illinois would lose 46,000 jobs and experience $32 billion less production output over the next decade.

I believe we should be looking for ways to grow jobs not add to our high unemployment and consider adding to the Earned Income Tax Credit.  The Governor has proposed increasing the EITC to 20 percent of the federal credit which would help more lower-income workers.

Illinois’ Workers’ Compensation Act has been expanded by legislation that passed both chambers and now heads to the Governor.  SB3287 directs that service organizations providing safety education or training and are wholly owned by either the employer or the employer’s insurer can now be sued for liability under the Workers’ Compensation Act.  Union sponsored safety trainers are not covered by the legislation.

A safety educator has no control over the work environment or worker’s actions yet can now be included in legal action for damages.  Proponents for the bill touted that employers would have less liability for damages since other parties could now help pay worker compensation claims.

This legislation is yet another case of avoiding personal responsibility and trying to place blame on someone else.  It will undoubtedly result in increased cost for workers’ compensation insurance in Illinois which is already among the highest priced in the nation.

A number of organizations, including these 4-C early childhood providers from DeKalb and Sycamore, were in Springfield last week to lobby for making the “Temporary” income tax increase permanent.

Among those who spoke at the rally was Alicia Lewis of DeKalb (fourth from the left), a mother and now teacher at the Children’s Learning Center. She explained how early child care supplemental funding helped her pay for child care so she could complete her college degree. You will also note Michele Baker-McElroy (8th from left and owner-director of a Sycamore child care facility) who recently received the 4-C Child Care Professional Award.

Members of the Illinois Association of School Administrators are also urging legislators not to pass a part-year budget or further reduce general state aid to schools. Reportedly three-quarters of schools are in financial difficulties due to state mandates and the social and developmental needs of students.

Another Tax Proposal on the Ballot

The House has passed its second non-binding referendum question for the fall election, this one resurrected from a tax proposal that found insufficient legislator support. Speaker Madigan sponsored SB3816 which will ask voters if they would like to see a 3 percent surcharge on incomes over $1 million with the revenue directed for education.

Such a tax is estimated to raise $790 million for education, however, don’t assume it will be “additional” revenue. Remember the original lottery act that was intended to fund education? The lottery money is going to the Education Fund but it simply allowed previous appropriation amounts to be used for other services.

While it may be a popular idea to ask the “rich” to pay more taxes, those reporting incomes of over $1 million include small business owners who report business earnings on their individual tax returns. Small businesses that are the drivers of employment and the backbone of our economy would have to pay the additional 3 percent tax.

Again I ask why the Governor and legislative leaders keep proposing ideas to take money out of the economy rather than let people keep their hard-earned money to spend as they want, invest in their business, grow the economy and employ more workers.

One ballot question you won’t see this fall is “do you want the temporary tax to be made permanent?” Legislation to ask voter opinions on that question was blocked by the Speaker.

The joint house committees of Revenue & Finance and State Government Administration have been gathering data about the state’s tax policies for months. We have tried to gather comparisons with other states and recommendations from think-tanks, academics and the business community.

Take a look at the raw data on the state website and help draw conclusions for making Illinois more competitive. The committee’s summary report which will be reviewed and released this week does not make a lot of recommendations. After all, Speaker Madigan want’s to control the process.

The committee did agree to recommend eliminating the corporate franchise tax, lowering the limited liability corporation (LLC) filing fee, lowering the corporate income tax and eliminating the E-10 ethanol tax credit. There was no agreement on continuing a host of other tax credits but there was strong interest in competitive tax exemptions to attract more computer data centers and income tax credits to incentivize businesses to relocate or expand in Illinois.

In sizing up our business climate, a number of ranking services place Illinois in the lower third of states citing concerns about regulations, taxes, legal costs and labor issues. The committee concluded that a state ombudsman-point person– would help businesses navigate state regulations, licensing, job creation, retention and relocation.

The committee was very mindful of the impact on state tax revenue when it debated tax credits, incentives and allowances for collecting taxes. Therefore it couldn’t separate the merits of many credits with the state’s dire economic condition.

No mention was made of one of the biggest taxes on small business and individuals,–the property tax. I continue to urge a general review of Illinois’ tax structure and a fairer way to collect needed revenue for education.

Will the Next Budget be Just Right?

As I drove home from Springfield Friday I couldn’t help but ponder the two rejected budgets, the cancellation of two session days and only six remaining days to this legislative session. For some reason the childhood nursery rhyme about the three bears came to mind: baby bear found “one was too large, one was too small and finally one was just right.” Perhaps this applies to the budget.

Could Speaker Madigan-the master strategist– have planned this budget show-down from the beginning? Why, if he needed bipartisan support to pass a budget, did he not seek it when he met with Republican leader Durkin last week? Why did he cancel session days if there was no “Plan C” budget?

The value of bipartisan input on the budget was emphasized in debate this past week. When the speaker introduced the anticipated revenue and mandated expenditures for FY2015 in March, it was Republicans who pointed out the many spending lines that were too high and thus left too little for important services of the state like education, care of older Americans and the disabled.

The Speaker knew the accuracy of our argument and the budget that was presented last week reflected a paring down of mandated expenses and therefore another $893 million was available for essential programs. There is much more that can be trimmed from this budget without affecting vital services and our most vulnerable citizens but the Governor nor Speaker Madigan have wanted to entertain a debate. There is legislation that is held in committee that would help grow our economy and put people to work without taxing more of each dollar earned. Let’s debate these ideas.

So when you hear that Republicans have no ideas and just want to say “no”–like was said in the House debate many times recently– remember the facts. Remember that bipartisan discussions do improve legislation. I hope Speaker Madigan will draw from these ideas in his next budget bill so that it will be “just right” for the State of Illinois.