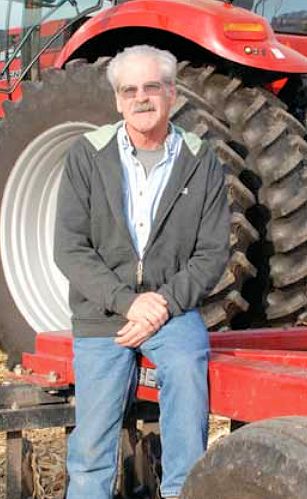 John Diedrich, Sycamore farmer From Manhattan to my corn field in 10 minutes “Straighten up! Company is on the way.” The words blasted out of the two-way radio. It was corn harvest 2013 and my brother had just given me the heads-up that several young passengers were on their way to our field.

My niece Mary and three of her college friends soon arrived, introductions were made, and Katie volunteered to climb aboard my red machine. She settled into the ‘training’ seat next to me. “Ever been on a farm before?” No. “Any idea of what this machine does?” No. “Where did you grow up?” Manhattan. I quickly realized that I had only the next ten minutes to explain to Katie what was happening beneath our very feet.

I was using auto-row guidance and I instinctively reached down and picked up a sun-dried ear of corn. It was an orphan ear that I had rescued after it had been inadvertently knocked to the ground when opening up the headland. It was among the 20 very large and magnificent ears of corn that adorned the space just in front of our feet. With both hands I twisted that ear and kernels went flying about the cab. “This,” I said, “is what is going on below us right now. Between turning cylinders of steel there are thousands of corn kernels exploding at this very moment!”

As we crossed the field I explained that we would harvest one acre of corn. In that one acre there would be 32,000 ears of corn like the one I held in my hand and all the kernels would be removed and put into the grain bin behind her head. She marveled at the stream of yellow gold and then asked how only the kernels were in that bin. “Where is the rest of the plant?” I pointed to the corn head and commented on the invention of the auger and how many grain augers were being used in the combine. I mentioned the effects of gravity and air movement and then motioned to the ground to have her observe that the plant material was being left in the field. She nodded her head in agreement.

We came to the end of the field and parked next to the wagon. I extended the unload auger and pressed the discharge button. Katie was visibly startled when the kernels of corn behind her head magically appeared at the end of that auger and poured into the wagon. It struck me that this was truly an exercise in child-like wonder. I was keenly aware of the awesome technology that has replaced the handpicking of every ear of corn that my father and grandfather experienced.

I thanked Katie for her brief company and the opportunity to share my knowledge. I now realize that I had touched only one ear of corn to tell my farming story. Of the 17 million ears of corn that George and I harvested in 2013, that one ear was truly the most educational and inspirational of them all – for a young city girl and me. ■ John Diedrich is a 3rd generation farmer who grows corn & soybeans in rural Sycamore.