Andrea Gorla, Assistant Superintendent of Business and Finance at DeKalb School District 428, told the audience at the DeKalb Area Rental Association quarterly meeting the bleak news. While residents experience sharp declines in their property values their tax rates were going to increase significantly to meet the tax levies requested.

School districts in Illinois are subject to the Illinois Property Tax Extension Limitation Law (35 ILCS 200/18-185) known as PTELL or the property tax code.

Under PTELL, local non-home rule units of government can increase their property tax collections by no more than the rate of inflation in the national Consumer Price Index or five percent, whichever is less. New or newly annexed property is exempt from the cap in the first year.

This tax cap does not apply to General Obligation Debt Bonds. The local unit can increase taxes by an unlimited amount to meet those debt obligations. In 2008 voters in District 428 approved a $110 million referendum. They only borrowed $108 million, according to Gorla, because they used $2 million of TIF money the City of DeKalb gave them.

According to Gorla, supported with projections provided March 31, 2014 by Elizabeth Hennessey, managing director with William Blair and Company, District 428’s debt bond broker, DeKalb’s (and Cortland, Malta) EAV has declined significantly and that means the burden to meet debt obligations will increase sharply.

Under the current debt payment schedule the 2008 referendum bonds would be retired in 2028. In 2014 the owner of a $200,000 home paid $331 of his tax bill towards the debt. But due to declining EAV, no new construction and a poor economy, according to Gorla’s numbers, that homeowner’s debt share will increase to $550 in 2017 increasing to $944 by 2020 and then hold steady for the remaining eight years of the referendum debt.

Of course there has to be assumptions made in projections. District 428 hired yet another demographic study to tell them that DeKalb would see a rebound beginning in 2016. Once tenants fill up all of the vacant commercial property along I88 east to I355 then the commercial/industrial tax base will begin to ease the burden on the residential sector. The projections assume that the City of DeKalb will not choose to extend or create any TIF Districts.

Most of the audience were DARA members, landlords of DeKalb. They have invested in rental properties within the district. Until the dust settles on NIU’s Bold Ideas initiative rental investment property owners have an air of an uncertain future in DeKalb. If the vacancy rate grows any increase in the referendum debt rate becomes more difficult to absorb and the landlord’s total obligation is much higher than that of an owner of a $200,000 home.

District 428 has another plan with accompanying projections to extend the referendum debt bond obligations another eight years. Under that schedule with the same assumptons the $200,000 homeowner would see a gradual increase from $330 to $731 (annual) in 2025. Instead of the debt being retired in 2028 the payments (roughly $750 per year) would continue until 2036.

But if the City of DeKalb extends or creates another TIF District both schedules underestimate the payment amounts. If there is a bubble on rental investment properties and it pops that would likely have a similar effect on the debt obligation schedule.

That’s why some, like Paul Meier of DeKalb, think District 428 should abate as much of the remaining referendum debt with most of the strange $21 million unencumbered grant it received from federal stimulus money. He urged Gorla to take the opportunity to build trust in the community by using the grant money for its intended purpose construction by paying down the debt.

Gorla admitted the impact on the debt burden would be significantly reduced. She said $10 million of the grant funds were earmarked for fund balances. It is board policy to maintain a 25% surplus fund for rainy days. The District is again this year running a deficit budget.

She also reminded those in attendance that young people will not choose to live in DeKalb without high quality schools. Since she came on board with the district before the referendum she has seen the percent of students living in poverty increase from 30% to now 53% of District 428’s enrollment.

Could it be that young families simply can’t afford District 428’s total property tax bill including operations and debt obligations? 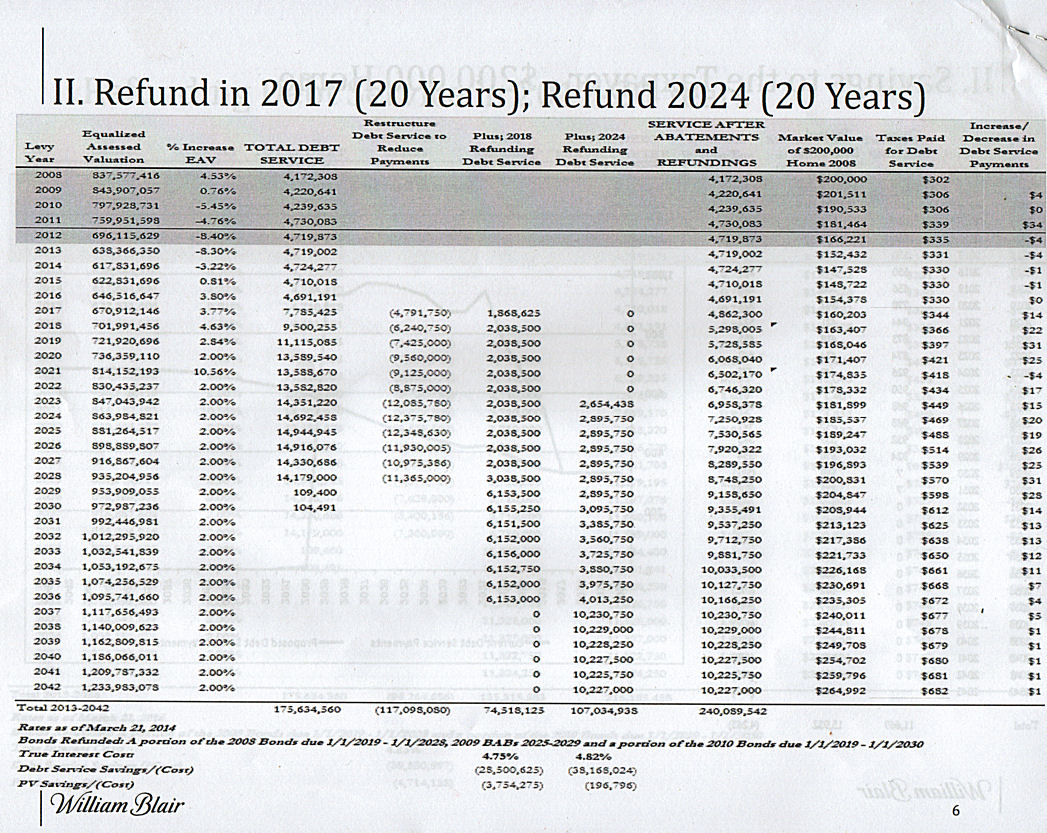 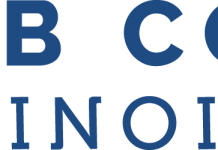 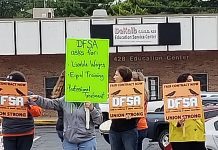