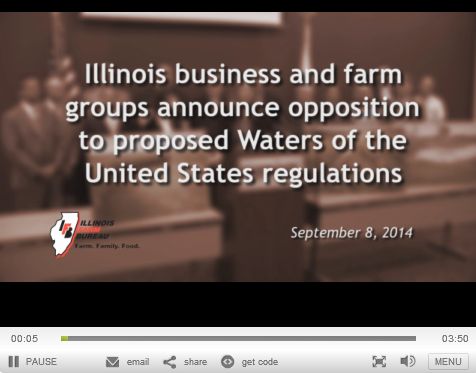 From Farm Week Now
by By Deana Stroisch

A coalition of 24 Illinois organizations – from farmers to miners to homebuilders — has joined efforts to oppose proposed changes to federal rules governing “waters of the U.S.”

The coalition, which includes the Illinois Farm Bureau, held a news conference last Monday at the Sangamon County Farm Bureau in Springfield. The group called on the Environmental Protection Agency (EPA) and Army Corps of Engineers to either withdraw the proposed rule or rewrite portions of it.

“Under the proposed rule, nearly every drop of water that falls on our state will be under the control of the federal government,” said Lauren Lurkins, IFB’s director of natural and environmental resources. “Farmers and other individual landowners would have to apply for and wait for federal permits, both from the Army Corps and from U.S. EPA, to do things that are considered common farming practices. We’re talking things like building fences, and spraying pesticides for bugs and for weeds.”

Without the proper permits, Lurkins said people face the threat of lawsuits – from the federal government and other citizens — and penalties of up to $37,500 a day per discharge.

Groups said the proposed rule would also add cost and delays to projects.

Opponents say that the proposed rule expands federal jurisdiction, while EPA maintains that the rule merely clarifies which wetlands and streams are considered “waters of the U.S.”

Jerry Peck, Illinois Manufacturers Association, called the proposed rule a “jobs killer” and said the extra costs, regulations and time delays could result in companies looking outside of the United States.

Phil Gonet, president of the Illinois Coal Association, said the proposed rule “would put this entire industry at risk.”

He said the proposed rule would increase the cost of starting – or expanding – a mining operation with “effectively no corresponding environmental benefit.”

“Given the ever increasing cost of mitigation, not to mention the time, cost and litigation burdens associated with trying to obtain any federal Clean Water Act permit, doing business in Illinois will be cost prohibitive for any mining companies looking to invest here,” Gonet said.