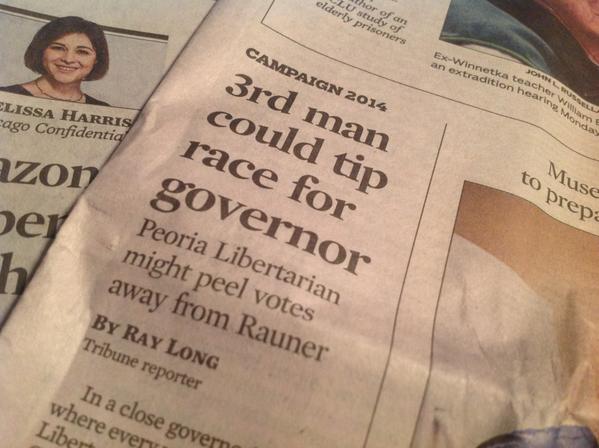 Chad Grimm is the jackass trophy brigade‘s last stand for keeping status quo in power and the taxpayers’ money in their hands. By the way the jackass isn’t meant to be symbolic of Democrats. No, it is truly a bipartisan poke to all those constitutionally entitled to their dependency on the state.

Grimm says he is a Libertarian and he accurately represents those in this state. He’s the typical no compromise on his personal rights to mandate how to life your life on social terms guy.

Pat Quinn is not expected to do as well in Cook County as he did in the 2010 elections when he won his bid to be elected Governor after replacing the disgraced Rod Blagojevich. He only won maybe two other counties in 2010. His opponent won in the other hundred. If there is a rift between Chicago and Illinois then advantage Chicago.

That’s why Quinn by intention money is going to Chad Grimm.  The brigade needs Quinn to close the gap downstate to make up for any losses in percentage of votes in Cook County. It’s still a popular vote don’t you know.

It’s all about jobs or pensions — age or sector accordingly — with the jackass trophy brigade. But they are obliviously blind to the need for other people’s jobs or pensions and that’s why Local 150 bosses joined the brigade with a $30,000 donation to Chad Grimm (or was it against Bruce Rauner?).

Thirty-grand is not a lot of money at least in this race. But Local 150 leaders don’t go around wasting money. Grimm can’t win this or any other statewide race with $30,000. He only had $100 before the Local 150 contribution. Grimm to win for $30,000 would far better be invested into lottery tickets or slot machines. But if $30,000 took enough votes from Rauner for Quinn again to win that would be considered a bargain for a feat worthy of praise from the jackass trophy brigade.

Unions tend to vote for their interests and that’s understandable to a point well below oblivion. Local 150 knows politics especially downstate and are generally more supportive of Republicans than other unions in Illinois. They contributed effectively in creating and maintaining jobs through landfill expansions in DeKalb and Winnebago counties as well as frack sand mining in La Salle County. It will be interesting to see how union solidarity holds up after the election and the debate for fracking on the earthquake fault lines in southern Illinois begins in earnest.

The case for campaign reform is made very clear with the Grimm strategy of the jackass trophy brigade. Those that want the type of reform in Illinois that gives everyone a fair chance don’t want to be a member of that club or fall for their tricks. Even if your local bosses are the tricksters.