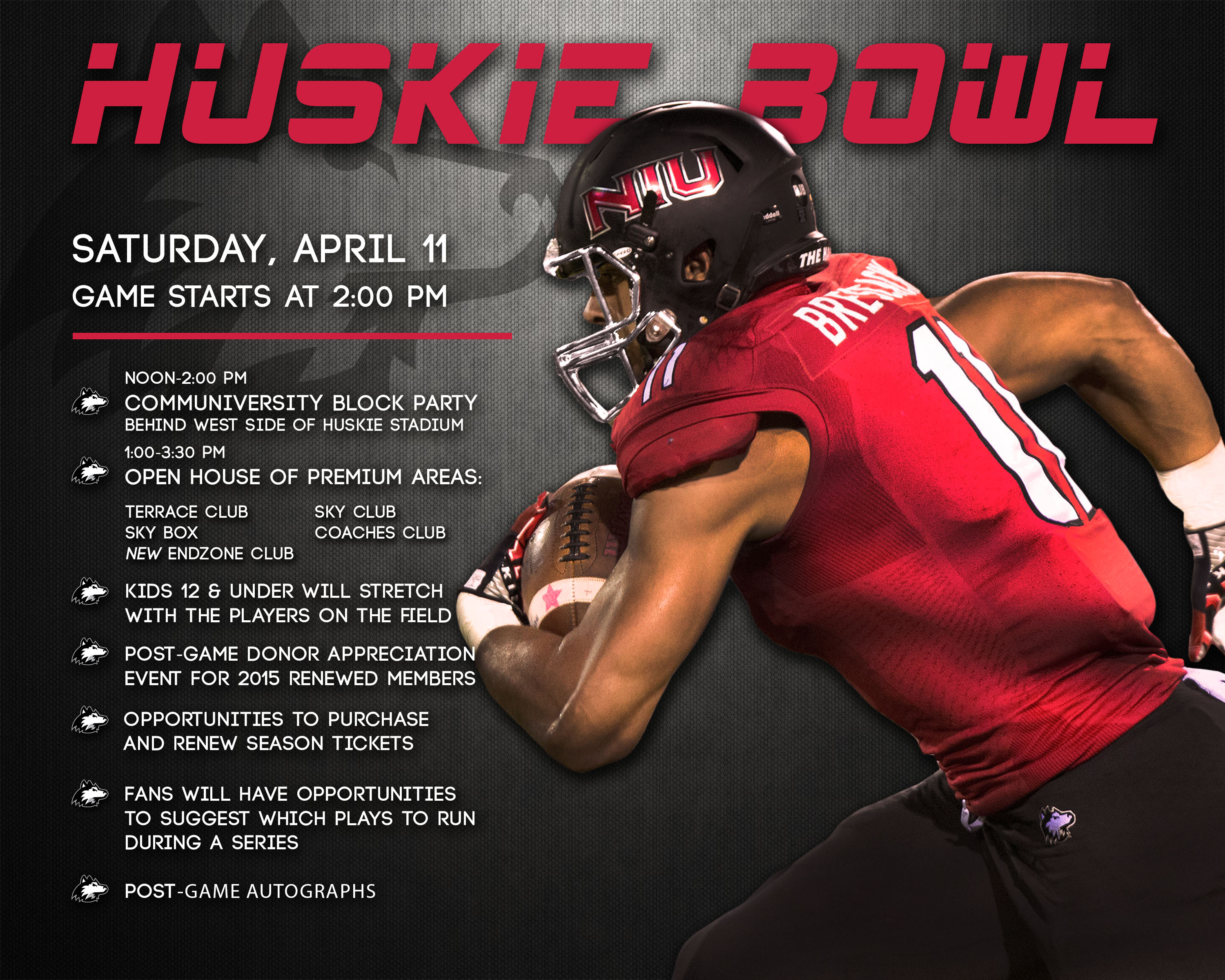 The NIU Football team’s annual Huskie Bowl, set for this Saturday, April 11th at 2 p.m. at Huskie Stadium, will be much more than a football scrimmage in 2015, with events prior to, during and after the practice for Huskie fans of all ages. There is no charge to attend the Huskie Bowl or for parking so make plans to be on hand for a fun afternoon of football and more!

This year, kids and even adults can join in the fun on the field with two new “interactive” elements. First, when the Huskies – who will split into the Cardinal and Black teams again this year – take the field for pregame warm-ups, all kids 12-and-under are invited onto the field to stretch with the team. Then, pay attention all “armchair” quarterbacks for your chance to choose one of the plays the Huskies will run during the scrimmage portion of the Huskie Bowl! Simply stop by the marketing table at the Block Party and make YOUR call!

Before the team takes the field at 2 p.m., everyone is invited to a Communiversity Block Party, which will take place directly behind the West Side of Huskie Stadium beginning at Noon. Local merchants and campus partners will be on hand with information, giveaways and more, NIU student-athletes will be signing autographs and there will be sign-making and face-painting stations. There will be food and drink available for purchase and music from DJ Toxic. Meet Mission and Victor E. Huskie, browse the latest Huskie gear and reconnect with fellow NIU fans!

Sign your child (or children) up for the 2015-16 Pup Club (ages 13 and under) at the NIU Athletics Marketing table at the Block Party for just $10 each, and be entered into a drawing for a football autographed by the Huskies!

Fans who have not renewed their season tickets prior to April 11 will have the opportunity to do so as the NIU Ticket Office staff will have a table at the Block Party, and available seats in the West stands will be marked.

Beginning at 1 p.m., join members of the Huskie Athletic Fund staff at the Premium Areas Open House. Check out the view from the Sky Box and Sky Club seats, walk through the Coaches Club and the Yordon Terrace and head down to the South End Zone, site of the new End Zone Club to see just how close you could be to the action this year. There will be (free) light snacks, as well as a chance to choose your premium areas options and renew your Huskie Athletic Fund donation for 2015.

During the Huskie Bowl (format to be determined by coaching staff), get familiar with the players to watch on the 2015 NIU team and hear from some of those players and coaches as on-field emcee, and Assistant Athletic Director Matt Lipman, describes the action. After the scrimmage, head down to the field to get autographs from your favorite Huskies.

Finally, all donors who have renewed their Huskie Athletic Fund commitment by (or on) April 11 are invited to a special post-Huskie Bowl reception in the Barsema Hall of Champions where NIU Head Coach Rod Carey will give his post-spring thoughts and NIU Associate Vice-President and Director of Athletics will update fans on the latest news from Huskie Athletics. Renew your donation on the spot and enjoy light appetizers and a cash bar as the Huskie Athletic Fund looks to build OneXone in 2015!

So come on out for the Communiversity Block Party (Noon-2 p.m.), enjoy the views, light snacks and soft drinks during the Premium Areas Open House (1-3:30 p.m.), Stretch with the Huskies (kids 12-and-under), check out the 2015 NIU Football Team during the Huskie Bowl (2-3:30 p.m.), get autographs on the field and be sure to RENEW today to join the Post-game Reception. Parking is available in all paved areas around Huskie Stadium, including Lot K, P and PS and the NIU Convocation Center. At this time, grass lots are not scheduled to be open for parking.

Season tickets for all six 2015 NIU home games are now on sale online at NIUHuskies.com or by calling 815-753-PACK (7225). Huskie Football season tickets remain the best value in Chicagoland with the entire six game season available for prices starting at just $99, a 61 percent discount off the single game price. Faculty and staff, senior citizens (62 and over) and NIU Alumni Association members can purchase season tickets for just $115. The Huskies are also offering two different three-game mini-plans in 2015 for just $75, and the new Huskie Family Pack, which includes four season tickets for just $299 in sections A, B, F or G of Huskie Stadium.