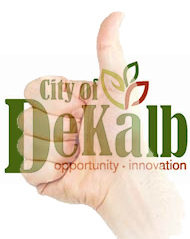 Promotions of six City staff members were presented to the City Council on Monday night. The promotions were made in the Fire Department, the Police Department and the Public Works Department. Each promotion was carefully considered and made to stimulate positive growth among City staff.

“These promotions are representative of the City’s excellent staff,” said Mayor John Rey. “We are so pleased to have hard-working, innovative individuals to move into these high level positions.”

Interim Public Works Director John Laskowski said he is grateful that the City is able to promote from within the organization to retain institutional knowledge of the City’s practices and needs.  “It really helps us do our jobs well,” Laskowski said.

In Public Works, Jake Keck was promoted from Operations and Maintenance Manager to Support Services Superintendent.

The promotions are a result of the City’s Pay, Compensation and Classification study, which was completed in May. The results of the study spurred reorganization among several departments.

“Thanks to the City Council for approving the study and giving us the opportunity to promote these hard-working individuals,” said Police Chief Gene Lowery, who promoted four staff members in his department. “We look forward to seeing everything that is accomplished by the staff members who were promoted.”