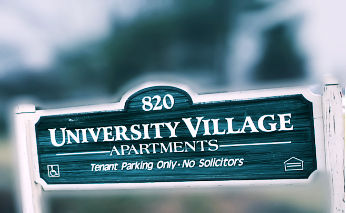 As city leaders contemplate a new 10 year strategic plan for the future of DeKalb they must first come to grips with a community within the community — that being University Village. A proposal for zoning considerations will be heard at tonight’s (Aug. 24) city council meeting.

The proposal seeks to rezone University Village to maintain occupancy at the current level in the event of a catastrophic incident. According to current owners should more than 50% of the property be destroyed new ownership wouldn’t be allowed to rebuild at the current density. In such an event existing density zoning ordinances would result in the loss of 178 households.

Alderman Dave Baker (6th ward) wrote a scathing letter to the editor opposing the proposal for what he says amounts to a reward for the current investors for milking their project for forty years while creating a depreciated – poorly maintained and run down, high density place that forces the city to pay for increased social services.

His letter drew a sharp response from the current owners who blasted Baker for making false accusations of owners milking the project and describing the property as run down.

According to their rebuttal letter within the past ten years University Village has reinvested over $5,000,000 in capital improvements, including but not limited to security cameras, exterior lighting, new roofs, new siding on about 75% of the buildings, new balconies, new windows, sidewalks, concrete replacement and landscaping. In addition, repairs and maintenance has substantially exceeded that $5,000,000 amount.

Were permits issued? Were improvements noted by the tax assessor? Were waivers or exemptions granted?

There are annual U.S. Department of Housing and Urban Development (HUD) and Illinois Housing Development Authority (IHDA) inspections, which include occupied and vacant units, common areas, and the exterior of the buildings and grounds. University Village is also required to conduct an annual inspection on all of the units to insure that residents are living in an acceptable environment.

If DeKalb’s 10 year strategic plan is to have any chance for improving the future of the city then truth must be sorted from fiction.

It was reported in a recent housing study that perhaps as much as 11% of District 428’s enrollment came from University Village. It has also been reported that the property receives a discounted rate on property taxes compared to other rental properties in the county.

Local property taxes pay the lion’s share of local public school expenses. Whereas DeKalb is a Home Rule community and the Illinois courts shall construe that power liberally there is no excuse for a discounted property tax rate for University Village. True federal and state taxes come from the same pockets but discounting property taxes amounts to a struggling college community unfairly subsidizing a federal housing program.

District 428 is operating in the red and drawing down its rainy day fund. Any consideration of a proposal for University Heights must make the school district whole.

There are far too many questions than answers for any responsible action to be taken on the University Village proposal by the city council at this time.