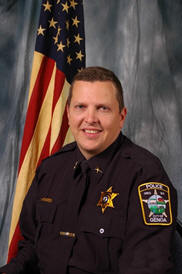 At the September 1st regular Genoa City Council meeting, Mayor Mark Vicary submitted the appointment of Robert Smith as Chief of Police, which was unanimously approved by the City Council. Chief Smith has been the Acting Chief since April of 2015 as part of the transition begun for the former Chief’s retirement. Bob Smith is a 20 year veteran with the City of Genoa Police Department. Before becoming Acting Chief in April, he had served the past 14 years in a supervisory role as Sergeant with responsibilities for investigations, staff scheduling, and serving as evidence officer. In addition,after developing a plan reinstituting the City’s K-9 program through donations, he has served and will continue to serve as the City’s K-9 Officer. Even before the past 5 months as Acting Chief, he had been in charge of the Department numerous times when the Chief was out of town.

Chief Smith has attained a Master’s Degree in Organizational Leadership from Judson University after receiving a Bachelor of Arts in Human Services from Judson. He has also attended the FBI National Academy in Quantico, Virginia, and the Northwestern University School of Police Staff Command. Chief Smith is also a U.S. Army veteran having served as a Military Police Officer.

Mayor Vicary noted that he had been strongly impressed with Bob Smith’s diligence upon becoming Acting Chief, observing that in a few short months, Bob had obtained a breathalyzer to restore this in-house capability for Genoa Officers and thereby avoiding driving significant distances to use an offsite machine, acquiring squad car computers and video cameras, implementing tele-communication upgrades for squad cars and officers, and updating the City’s Emergency Operations Manual, vicious dog ordinance, and part-time police standards ordinance.

Mayor Vicary noted that ‘’the magnitude of having the Emergency Operations Manual up to date is underscored by the realization that disasters such as the one that just befell Fairdale, so nearby to us, demand that we be ready to protect the public should anything like this occur”. Chief Smith noted his excitement with the opportunity to serve the Department he has devoted his career to, and stated that “I will continue to work with City Staff and the Public to provide the best services possible, and I look forward with the new opportunity to work on additional goals for the City and the Police Department”.