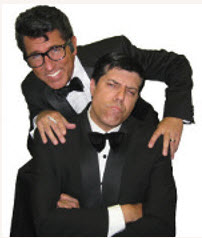 Dean Martin and Jerry Lewis were the hottest act in America during the early 50’s. Dean of course, the straight man, with a charming voice and Jerry the lovable goof ball added the comedy. Never have two artists captured the look, the sound, the very essence and chemistry of these two “Icons” more than Tom Stevens and Tony Lewis. You don’t want to miss this evening of unpredictable hysterical music and laughter!

Both of these incredible performers have each had amazing success on their own. Tony spent the last 27 years performing in Australia and created a name for himself as the quintessential “Jerry Lewis Tribute Artist” selling out countless venues and earned respect as one of Australia’s best entertainers. Since his 1st appearance at the annual Dean Martin Festival in 1998, Tom Stevens has earned his title as “Best Dean Martin Tribute Artist.” Even Dean’s daughter, Deana said, “I’ve never seen anyone look and sound more like my Daddy!”

Get some comedy in your life and see the Dean Martin & Jerry Lewis Tribute Show yourself this Saturday, November 7, 2015 at the Egyptian Theatre in DeKalb. The show begins at 7:30pm. Tickets are $18.50 and $28.50 for premium seating. Watch the video below for a preview of the fun!