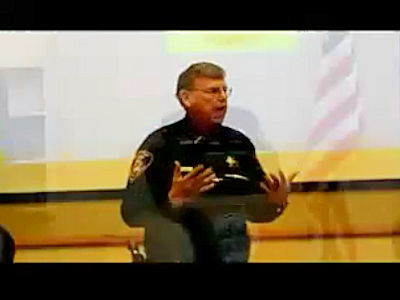 The Academy has been co-sponsored by the Sheriff’s Office and the DeKalb County Farm Bureau since 1996. Additional sponsors include Representative Bob Pritchard, who is also a graduate of Citizens Academy Class #1, Senator Tim Bivins and Nathan Winston Services. The Academy is scheduled to begin Thursday January 7, 2016 and will conclude with graduation at the DeKalb County Farm Bureau on March 10th, 2016. Classes are from 6:30-9:30 pm for 10 consecutive Thursday evenings and are held primarily at the Legislative Center in Sycamore. The Academy is not meant to prepare individuals for a law enforcement career, but as an educational opportunity for DeKalb County Citizens.

Those interested in attending Citizens Police Academy may contact the Sheriff’s Office for an application by calling 815-895-7260 or by stopping at the Sheriff’s Office at 150 N. Main St. in Sycamore. Applicants must be at least 21 years of age and live or work within DeKalb County. Basic background checks are conducted on all applicants. The application can be downloaded by going to www.dekalbcountyilsheriff.org and looking along the left hand side for Citizen Academy application.