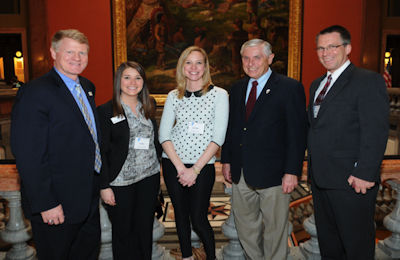 April 11, 2016
In This Issue:
Citizens Converge on Springfield
Hundreds of Bills Receive Action
New Proposal to Fund Social Services
Attacking One of the Root Causes of Crime
Rolling Thunder Brings Display to Capital
Youth Council Anxious to Speak with Officials

Last week the House convened for the first time in a month and resumed consideration of over 2,100 House bills and nearly 1,200 Senate bills introduced this year. Individuals and organizations interested in these bills and the legislative process continue in increasing numbers to converge on the capital from all parts of the state.
Meeting with these groups is an important part of my work so I better understand how bills will impact them, their employers and organizations. I also enjoy the opportunity to explain the legislative process and, if time permits, show them around the capital.

YMCA Day was this past week and representatives from both the Kishwaukee and Belvidere Ys attended. Presidents Mark Speigelhoff (right) and Jen Jacky (center) along with Gary Evans and Lesley Feyerherm shared concerns about a bill that would create licensing difficulties for their daycare services.
Agricultural groups, gun owners, social workers, dental students, environmental groups and advocates for the homeless were among others discussing bills. The Illinois Farm Bureau, always a helpful voice on agricultural issues, was recognized in the House on their 100th anniversary. Of course most groups also mentioned the desperate need for a budget. 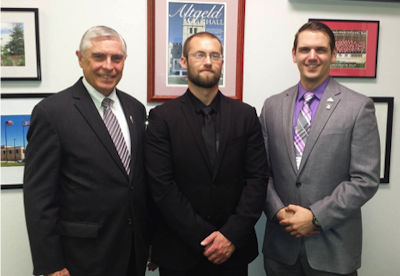 Northern Illinois University Veterans Club President Matthew Galloway and Eric Linn (right) talked about how the lack of funding for higher education is affecting their education and return to civilian life. Legislative leaders were to meet with the Governor on Friday to discuss the budget, but Speaker Madigan refused to attend.
House Republican Leader Durkin’s Capitol Internship Program also brought down NIU political science students, Nick Lisle and Chris Adams to experience legislative work. It is an intensive one-day program designed to help interested college students gain an understanding of the behind-the-scenes work that it takes to pass legislation and shape public policy issues.

The deadline for passing bills out of committee passed last Friday so much of the week was spent in hearings. Here are some highlights:
HB 5809, which would have allowed pharmacists to prescribe birth control medication to women over 18, failed to pass out of committee.
After a lengthy debate, HB6164 also failed to move out of committee. The bill was an initiative from Lt. Governor Sanguinetti’s Unfunded Mandates Task Force and would have lessened restrictions on a school contracting with a third party to provide “non-instructional” services like driver’s education. It would have also allowed additional excuses for pupils to opt out of physical education classes. The legislation was estimated to save school districts $200 million annually.
A bill that would legalize fantasy sports was not called for a vote and the sponsor is negotiating an amendment. I have been hearing a lot of support for HB4323 from constituents. The bill is a response to Attorney General Madigan’s ruling last year that fantasy sports contests constitute gambling and are therefore illegal.
Bills passing out of committee included:

HB6308 which increases the age of persons who will be tried in Juvenile Court and HB 6083 which lengthens to 5 years the time that civil actions for wrongful death can be filed.
HB5570 would require the State Board of Education to establish guidelines for the creation of a high-skilled manufacturing curriculum for vocational education programs. • HB4227 necessitates that public schools require 181 days, instead of 176 days, of actual pupil attendance.
HB4983 creates the State Global Scholar Certification Program to recognize public high school graduates who have attained global competence, sufficient for meaningful use in college and a career.

HB4212 changes the selling of loose cigarettes from a criminal offense to a fine-able offense. The bill was in response to an incident in New York where a person was killed in the process of being arrested for selling “loose cigarettes.”
HB5611 authorizes district fire chiefs to enforce the State Fire Marshal’s rules in respect to dangerous buildings and structures including the vacating of a building.
HB5945 changes the phrase “undocumented immigrant” to just “alien” when referring to someone not legally admitted to the United States.
HB 5790 gives the Department of Agriculture the ability to sell signs designating “Bicentennial Farms” if they have been owned for 200 years or more by descendants of the same family.

Efforts by Democrats to pass portions of a 2016 budget have not provided a funding mechanism and would have just increased the state’s unfunded obligations. Both sides of the aisle acknowledge that social services are at their financial breaking point just like colleges and universities.
Senate and House Republican leaders presented a new proposal last week to properly fund services including screenings for lead poisoning, services for victims of sexual assault and domestic violence, and home care for elderly residents. Under this $1.3 billion proposal, part of the cost would be paid by transfers from other state funds and part from general revenue.
The Leaders also reaffirmed their support for funding higher education, and noted there are a range of options available to secure funding, such as using procurement reform savings, using excess special funds, and giving the Governor authority to move money around from different accounts.
Both Senator Radogno and Representative Durkin believe that comprehensive pension reform can generate enormous savings that could be used to fund areas of the budget. Governor Rauner has suggested immediate changes to the pension systems permitted by law that would generate hundreds of millions of dollars in savings for Fiscal Year 2017. These include items like ending salary spiking, capping pensions for salaries over $180,000 and stabilizing the actuarial projections for return on pension investments.

Attacking One of the Root Causes for Crime

Several efforts are underway that could shift the focus of public policy toward the root causes of crime rather than just reacting once a crime occurs. The shift is propelled by the failures of the federal crackdown on crime in the 1990’s and the limited effect harsh laws like minimum sentencing had on crime rates. Then too the costs of hiring more police and of incarceration have grown too large for state and municipal budgets.
Many feel one of the biggest and easily identifiable root causes of crime is a lack of education and the inability to make an honest living. There is legislation this year dealing with expulsion from school and avoiding prison sentences for young people which makes it more difficult for them to find work and housing.
The Annual Education Legislative Institute, held last week in Springfield, focused on efforts in California to help students prepare for college and careers, as well as complete college with the skills needed to find work in a global economy. Speakers focused on the support students need and importance of high school and college faculty coordinating curricula. The speakers explained efforts in Palo Alto to fund college for students and support student completion rather than allow students to drop out with a high debt. The educational event is organized each year by Advance Illinois.
Efforts like these are important, but the single largest issue holding back students is an unfair system of funding schools in Illinois. Governor Rauner has proposed fully funding the school formula at $6,119 per student for the first time in years but the funding is inadequate for the extra support need to educate students from minority and low-income families. 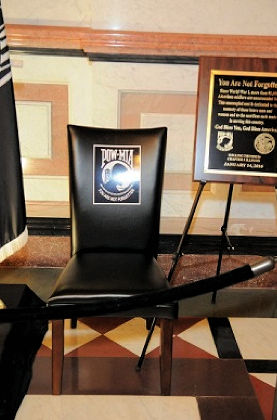 A display honoring American Prisoners of War and soldiers Missing in Action (POW/MIA) was erected in the Capitol last month by the Olney chapter of Rolling Thunder motorcycle group that works to brings attention to veterans. It is part of the National Chair of Honor “One Empty Seat” program, which helps to recognize and honor more than 92,000 American soldiers who have been unaccounted for since World War 1. All legislators joined in sponsoring a House Resolution to thank the group for their work.

This week holds another full schedule in Springfield passing legislation and debating the school funding formula. I’ll be joined by members of my Youth Advisory Council for a two day visit full of meetings and an inside look at state government. I’ve sponsored a Youth Council every year I’ve held office because I think our state’s future will be in better hands if our citizens understand the process and are more involved. My Youth Council consists of students from each high school in the district who meet over the course of 4 months to learn about state and local government and public service careers. I also welcome their input on the legislation we’re currently debating. Contact the office if you would like to visit about legislation or if we can be of assistance.