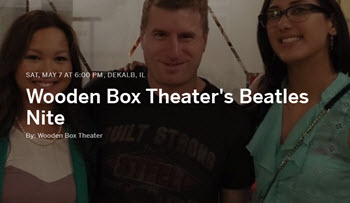 This Saturday May 7th at 6:00pm the Ellwood House Visitor’s Center in DeKalb will host area performance group Wooden Box Theater, as they present a live event that will join local theatrical performers, area fashion models, regional Real Estate agents, local vendors, and live music with their production of “Bring Me To Life: The 6th Annual Beatles Nite.’ The previous 5 annual Beatles Nite’s were held at area venues such as the House Cafe, Ellwood House Visitor’s Center and the NIU Skyroom.

Wooden Box Theater’s sixth installment of it’s annual Beatles themed event series will be co-hosted on stage by newcomers to the group Jacquelyn Krenc, Sarah Lynn Bish, Jessica Lynn, Elaine Lord and Cait Arwen. Lead writer Dan Sherrill explains, “These five co-hosts were handpicked to represent the Beatles with their creativity, and appearances in the event. I had my heart set on giving them their introduction into our style of event by putting them out front with a golden opportunity to leave their mark on the event, as well as being a team of co-hosts the Beatles themselves would be proud of.”

Such has been the case with the previous five Beatles events, Wooden Box Theater blends artists and guest stars from many different genres in an effort to show creativity and boldness, as the Beatles did with their music and performances. For this particular installment, the team has added Krysta Marie Zelaya, as the event’s special guest time keeper, and a pair of area Real Estate agents, which will bring their influence and guidance throughout the event. Annette Siwy (Signature Realty), and Michelle Ohlinger (Coldwell Banker) will be featured throughout the night in guest starring roles, as well as on stage interviews. Dan Sherrill explains, “The addition of realtors into our events will be ongoing and will add a new dimension to our event format in the coming years.”

Special guest appearances by area small business owners for this year’s Beatles Nite will include Chanla Frederickson, of Chanla Chau Cosmetics, and ‘Mothers Little Helpers’ founder Jenny Jeep Johnson. Both have previously added their presence to previous Wooden Box Theater events in 2015, and will continue with the group going forward. There will also be notable appearances throughout the event on stage by Susie Bellamy, Megan Nash, Jax Verdeana, Courtney Ludwig and Katherine Sonya.

Event writer Dan Sherrill adds, ‘This year’s Beatles event got its name from the Evanescence song, “Bring Me To Life,” in both the general vibe of the event, and inspired by the music video for the song. Every year we use our Beatles events to showcase a bold cast, and a creatively-driven production that we believe would impress the real Beatles if they were in attendance. There’s many tribute bands out there, so to avoid that label, we let our creativity and soulfulness of the entire group take center stage with these Beatles events.”

The event will also showcase area belly dance specialist, ‘Zephirine Moon Garden,’ for an artistic dance segment. She has been performing on occasion with Wooden Box Theater since late 2011, as well as with the Prairie Smoke Belly Dance group in area venues. She will also display an array of handmade gifts for sale.

Wooden Box Theater starring in ‘Bring Me To Life: The 6th Annual Beatles Nite’ will be held this Saturday May 7th at 6:00pm inside the Ellwood House Visitor’s Center located at 509 N. First St. in DeKalb, IL. Admission is $5.00 at the door with a ‘semi-formal’ dress code. For more information visit: https://www.facebook.com/events/955675611194397/