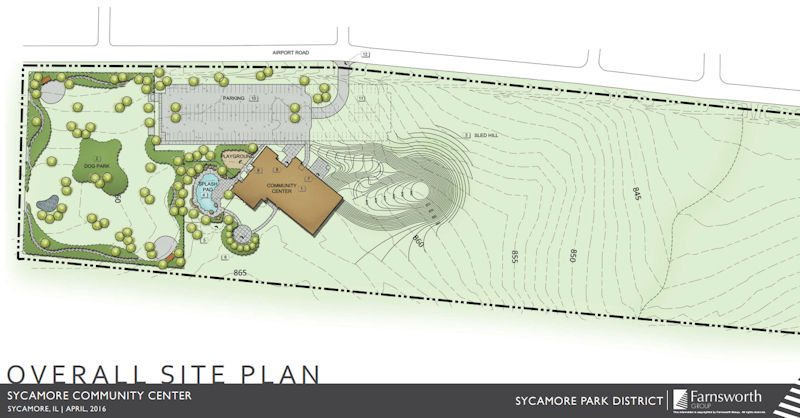 The excitement surrounding Sycamore Park District’s highly anticipated ACTION 2020 projects is gaining some real momentum. Weather permitting, demolition of the house and outbuildings on the future recreation campus site will begin on June 11 and take six to nine days. “We anticipate the community will be excited to see some movement on the site,” says Ted Strack, Sycamore Park District Board President. He adds, “our volunteer committees, Board and staff have been working hard behind the scenes, however this is the first physical change onsite and evidence that construction is imminent.” The District plans to break ground on the community center next summer.

As groundwork begins onsite, things continue moving along steadily behind the scenes. The District’s Professional Services Committee, comprised of community volunteers, Board and staff members, received eight submittals in response to a recent Construction Manager RFQ. The group has narrowed the choice down to three firms and will conduct interviews in the coming weeks. Once the final selection is made by the Board, the chosen firm, will work closely with architecture and engineering firm Farnsworth Group to put together bid specs, cost estimates and initiate the bid process between August and December of this year.

Prior to the upcoming demolition, the land has undergone a topographical survey as well as soil boring and tests. There was an Environmental Assessment of the site that is required of the park district in order to insure the site. Then, schematic drawings and an overall site plan by Farnsworth Group were approved by the Park District Board of Commissioners at their April meeting after a public hearing on the project where input was also received.

The recreation campus will lie on the 25-acre site across Airport Road from the current Sports Complex and will include a community center, dog park, sled hill and splashpad as well as a playground, parking lot and outdoor patio/classroom spaces. “Citizen Committees have made this process a great success”, said Daniel Gibble Executive Director. “We had a separate group of citizens for each project providing input on what features should be provided, and their input is what framed the final result”, said Gibble. The large amenities on this site are only four of the seven projects that make up ACTION 2020, the Sycamore Park District’s long-range plan to provide residents with the recreational opportunities they seek, need and deserve. In addition to a community center, splashpad, dog park and sled hill, Other future projects will bring two new biking trail connections, a soccer complex followed by six new baseball fields and a new irrigation system at the Sycamore Park District Golf Club.