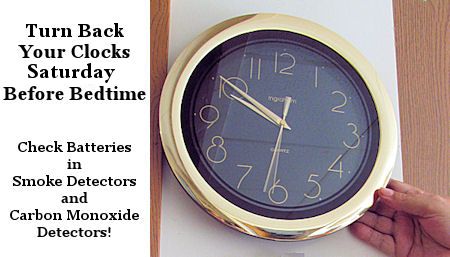 On early Sunday morning, November 6, 2016 at 2:00:00 AM, Illinoisans will be turning their clocks back one hour in observance of the return to Standard Time. When they do, the Sycamore Fire Department is reminding residents to replace the batteries in all of their smoke detectors. Firefighters are also urging residents to replace the batteries in their carbon monoxide (CO) detectors at the same time. NFPA 72, National Fire Alarm Code®, requires smoke alarms be replaced at least every 10 years, but because the public is generally unaware of this requirement, many homes have smoke alarms past their expiration date, putting people at increased risk. To find out how old your smoke alarm is and its expiration date, simply look on the back of the alarm where the date of manufacture is marked. The smoke alarm should be replaced 10 years from that date (not the date of purchase).

If your CO detector activates and you feel ill, leave the house and call 911. If you do not feel ill, push your detector’s reset button. If the alarm goes off again after a few minutes, open the windows, leave the house, and call 911. Since 2007 homeowners, landlords and building owners cin Illinois are required to install carbon monoxide (CO) detectors in any occupancies that have rooms used sleeping. This Illinois law requires the owner of the building to install carbon monoxide detectors within 15 feet of all rooms used for sleeping.

The minimal effort required to change a few batteries could mean the difference between life and death. The Sycamore Fire Department has long advocated the ‘Change Your Clock, Change Your Battery’ campaign, as a smoke or CO detector is one of the cheapest and most effective ways homeowners can provide year round fire and carbon monoxide protection for themselves and their families. Every year lives are lost in homes without smoke or CO detectors or those homes with a non-functioning smoke or CO detector. In a study conducted by the National Fire Prevention Association (NFPA), nearly 96% of households report having at least one smoke detector. Yet the US Fire Administration reports residential fires make up nearly 83% of all civilian fire deaths. The culprit is generally a disconnected or dead battery.