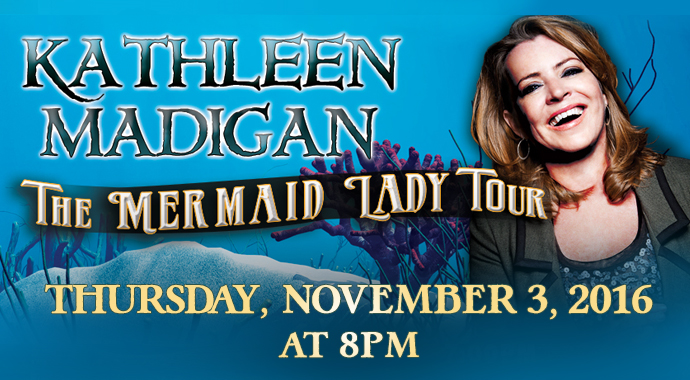 Kathleen Madigan is a regular panelist on Comedy Central’s The Nightly Show with Larry Wilmore, and she was nominated for a 2014 American Comedy Award for “Best Concert Comic.” Her third one hour special, Madigan Again, is currently available on Netflix and was named one of iTunes Best Comedy Albums. Her second one hour special Gone Madigan, premiered on Showtime and is also available on Netflix. Previously she’s released 5 CDs, 3 DVDs and starred in 2 HBO specials as well as 3 Comedy Central specials.

The Detroit Free Press and PopMatters.com featured Madigan as one of the “9 Funniest Women on the Planet” alongside Tina Fey and Amy Poehler. Lewis Black calls her “the funniest comic in America, bar non,” and Ron White considers her “easily one of the best comics alive. Plan to come see her this live right here in DeKalb this Thursday, November 3rd at the Egyptian Theatre at 8:00pm.  The Egyptian Theatre is located at 135 N. 2nd Street in downtown DeKalb.