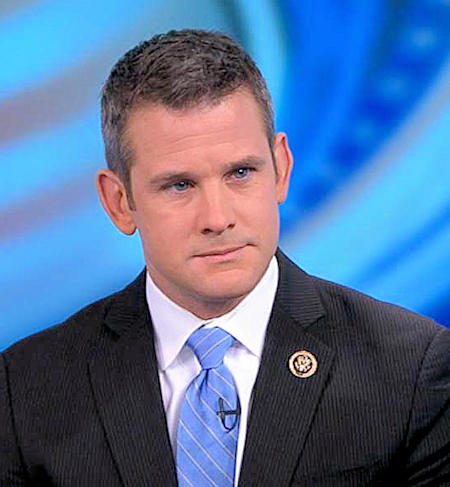 There is an opportunity to hear from U.S. Representative Adam Kinzinger and speak your mind this Thursday, Feb 2nd from 9:00 AM – 10:00 AM at the DeKalb Public Library, 309 Oak Street in DeKalb.

As a veteran of Afghan and Iraqi combat operations, I have firsthand knowledge of and care deeply about the turmoil in the Middle East.

For the sake of national and international security, the United States must continue to maintain diplomatic ties and push for democratic reforms in the region.  We must also continue incentivizing the advancement and protection of human rights for the people of the Middle East.

I am also deeply concerned about Iran’s hostile actions.  Another war in the region could be disastrous for the United States, Israel and its neighbors.  The security of the United States requires that we fully commit to preventing Iran from obtaining a nuclear weapon.

With respect to Israel, Israel is one of our strongest democratic allies in the region; Israel needs our support and help to promote peace with its neighbors.  Stability and security in the Middle East is in the best interest of region, the United States, and our allies around the world.

Kinzinger urges President Trump to exempt Iraqis who served alongside our military:

Today, Congressman Adam Kinzinger (R-IL) and Congressman Duncan Hunter (R-CA) sent a bipartisan letter to President Trump in support of the request by Secretary of Defense James Mattis to exempt Iraqis who served alongside our military. The letter expands on the need for a special review process for those who directly supported American personnel overseas. Upon sending the letter, Reps. Kinzinger and Hunter, both veterans who served in Iraq and Afghanistan, released the following joint statement:

“We made a promise to the men and women who served alongside us on the battlefield, and we must uphold that promise to leave no man behind. We urge the President to honor Secretary Mattis’ requests, and stand up for those who stood by our military and American personnel. For the safety of these courageous individuals and their families, and in the interest of our national security, it’s critical that we make this exception and do so swiftly.” READ MORE

As the 115th Congress gets under way, Congressman Adam Kinzinger (R-IL) will return to the House Foreign Affairs Committee and will remain a member of the House Energy and Commerce Committee. Following these announcements, the Congressman released the following statement:

“We had a very successful 114th Congress on the House Energy and Commerce Committee, and I believe this Congress will carry on the ‘record of success.’ With my roles on the Subcommittees on Communications and Technology, Energy, and Digital Commerce and Consumer Protection, I can advance the issues that affect my constituents in the 16th District of Illinois, and folks across the country.

“I’m also looking forward to returning to the House Committee on Foreign Affairs, where I will apply my military service and foreign policy experience in crafting legislation that puts our national security and global relationships at the forefront of our agenda.”