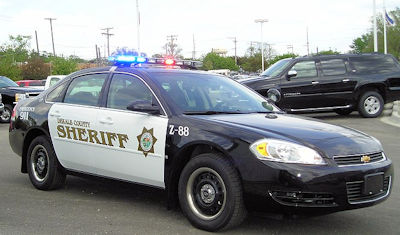 DeKalb County Deputy stopped a vehicle at 722 N. Annie Glidden Rd. in DeKalb, Il. for an expired registration. During contact with the occupants the Deputy smelled cannabis coming from the vehicle and asked the passenger for identification. The passenger Marcus McGill, DOB 1/21/86, address, 917 Pearl St. in Aurora, immediately exited the vehicle and ran East into The University Village located at 722 N. Annie Glidden Rd..

The Deputy chased McGill for approximately 200 yards and tased McGill in the back as McGill was reaching into is right side waistband. After McGill was handcuffed a .45 caliber semi automatic handgun was located under his body removed from the holster on his right hip. McGill was charged with Unlawful use of Weapon x4, Unlawful possession of firearm by felon, Unlawful possession of firearm and ammunition without a FOID card, Resisting/ Obstructing Police, and Armed Violence. McGill is being held at the DeKalb County Sheriff’s Office Jail without bond.