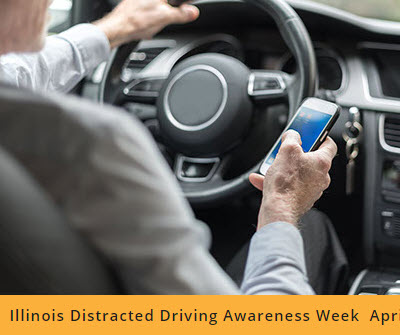 The ILACP, in partnership with AAA, and supported by the Illinois State Police, SafetyServe.com, the National Safety Council, the Illinois Insurance Association, almost 300 law enforcement/fire agencies and supporters from the private sector throughout Illinois, will work together during this week to educate motorists on all aspects of distracted driving. This campaign will also include the enforcement of applicable State distracted driving laws. According to the National Highway Traffic Safety Administration (NHTSA):

● 3,477 people were killed and an estimated 391,000 injured in motor vehicle crashes involving distracted drivers in 2015. That is a 9-percent increase in fatalities as compared to the previous year.

● 10 percent of fatal crashes, 15 percent of injury crashes, and 14 percent of all police reported motor vehicle crashes in 2015 were reported as distraction affected crashes.

● Texting while driving has become an especially problematic trend among millennials. Young drivers, 16 to 24 years old, have been observed using handheld electronic devices while driving at higher rates than older drivers since 2007.

It’s time to drop the double standard on distracted driving – the dangers are real. According to the AAA Foundation for Traffic Safety:

● In analyzing 2009-2012 data, that even while more than 8 in 10 drivers believed it completely unacceptable for a motorist to text or e-mail behind the wheel, more than a third of those same respondents admitted to reading text messages while driving.

● Just as disturbing, even as fatalities go up, fewer drivers seem concerned about texting while driving. According to Foundation’s 2015 Traffic Safety Culture Index, significantly fewer motorists (77%) believed texting while driving is a problem, down from 96 percent in 2013, a 19-point drop in just two years.

● Texting while driving is more than just personally risky. When you text and drive, you become a danger to everyone around you.

These partnerships have been formed to help further a traffic safety culture in Illinois and to reduce traffic fatalities and injuries resulting from distracted driving. Please help the ILACP, AAA, and DeKalb, to keep Illinois’ roadways safe and Illinois strong.