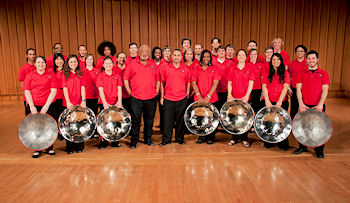 The NIU Steelband is back by popular demand this Saturday, April 8th, from  6:30-8:30pm at the DeKalb Public Library. This event is FREE and open to all, no registration required! Join them for what proved to be an engaging evening with this world-renowned band directed by Liam Teague and Clifford Alexis. Created in 1973 by G. Allan O’Connor, it was the first active steel band formed in an American university and has performed throughout the United States and around the world. NIU is one of the few institutions in the world at which students may pursue music degrees (undergraduate and graduate) with the steelpan as the major instrument of choice.

Over the years, the NIU Steelband has broadened the repertoire and performance for the steelpan; highlights include a performance for 18,000 soccer fans in Yankee Stadium, two successful tours of Taiwan in 1992 and 1998, concerts with symphony orchestras (including the St. Louis Symphony and the Chicago Sinfonietta), and performances at several Percussive Arts Society International Conventions (PASIC). In 2000 the NIU Steelband had the distinction of placing 2nd in the World Steelband Festival in Trinidad, and in 2002 performed several concerts (including the opening) at the Seoul Drum Festival in South Korea. NIU Steelband is a 35-member group and mainly comprises steelpan and percussion majors. The band performs regularly at public schools, colleges and universities, as well as conventions and arts series. The band has four recordings to its credit; including the most recent, “Dangerous”, featuring an eclectic blend of styles.

Sponsored in part by the Mary E. Stevens Concert and Lecture Fund. For more information, please contact Samantha at samanthah@dkpl.org or at (815) 756-9568 ext. 1701. The DeKalb Public Library is located at 309 Oak Street in  DeKalb.