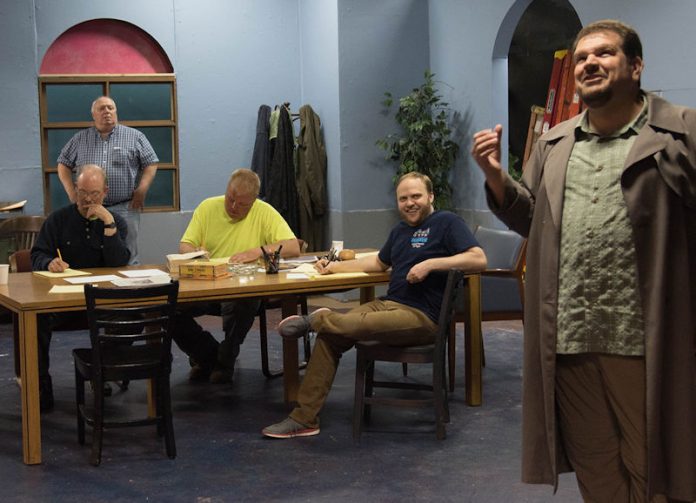 When Curt Helgren, a Rochelle resident, decided to expand his theatrical horizons to the east, he surely wasn’t thinking “Eastern Block,” but, come June 1, 2017, you will find him transformed into Val, a quick-witted, sharp-tongued, Russian émigré working in the writers’ room of a fictional comedy variety show in “Laughter on the 23rd Floor,” a play written by Neil Simon and directed by Bernie Schuneman for the Stage Coach Players in DeKalb. 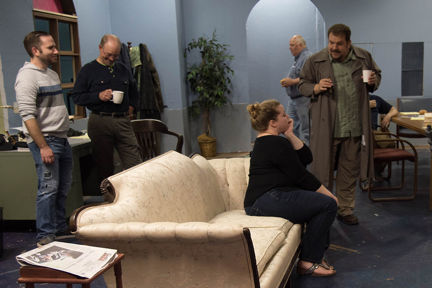 Set in 1953, “Laughter on the 23rd Floor” follows the harried, foul-mouthed writing staff of the fictional “Max Prince Show” – a show that bears a strong resemblance to Sid Caesar’s “Your Show of Shows” – as they frantically scramble to top each other with gags while competing for the attention of the show’s star madman, Max Prince. Prince is being pressured to dumb-down his show to broaden the appeal and is battling the network and counting on his writing staff to keep the show smart and afloat.

Neil Simon worked as a writer for Sid Caesar’s variety-comedy series and is clearly represented in the production by Lucas (Tom Stark), the new guy looking to become a permanent part of the team. In addition to Val and Lucas, there is the resident hypochondriac, Ira (Greg Anderson); the gag man, Milt (Jeff Heider); the heavy smoker with a caustic, biting sense of humor Brian (Dan Hyde); the intelligent and sophisticated writer, Kenny (David Booth); and Carol (Sara Pajor), the only woman writer on the show who is tough and irreverent but concerned about accusations of Communist sympathies. Max (Larry Rapach), who is often accompanied by his secretary Helen (Madison Bishop) knows he has one of the greatest writing staffs in television, but is very aware that network doesn’t care.

“Laughter on the 23rd Floor” is a laugh-out-loud comedic drama peppered with profanity, tension and the gritty reality behind the polish in the golden age of television. “Ozzie and Harriet” it is not.