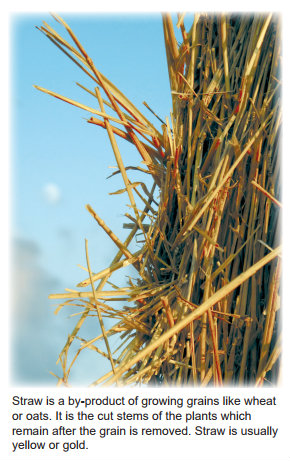 Hay is grown specifically for use as livestock feed. It can vary from a dark green when freshly baled to a lighter green after time in storage.

Hay can either be a single species or a mixture of plants. Alfalfa, clover, ryegrass, and timothy are commonly grown for hay.

Hay contains more nutrition than straw because it is harvested before the plants go to seed. (Once a plant goes to seed, it pushes much of it nutrients into the seeds.)

Like drinking straws, the stems of wheat or oat straw are hollow. Straw is often used as bedding for cattle or horses. It can also be used as a feed component for cattle.

When hay is cut, it is left in the field for a day or two to dry. The same is true for the stems of wheat or oats after the grain
is harvested. Once the cut plants are dry, they are raked into
windrows in order to be baled.