School choice programs provide families with the opportunity to choose the academic environment that best matches their students’ educational needs, rather than being restricted to attending a school based only on where they live. Many low-income families face financial barriers limiting where their children can attend school, and as a result are sometimes forced without other options, to attend failing schools. Charter schools have helped create some options.

A recently proposed scholarship program attempts to increase school choice opportunities for all families by creating a state-funded program where individuals and corporations can donate to a scholarship program and receive a “dollar-for-dollar income tax break” based on their program contribution. A Chicago Tribune Editorial supported the initiative, calling it “a lifeboat for families trapped in chronically underperforming schools”. Seventeen other states have a similar tax-credit scholarship program.

Opponents have condemned the proposed program, arguing that it will hurt public school districts. David F. Larson, a superintendent of Glenbard Township High School District 87 wrote in the Chicago Tribune to “beware of snake oil salesman”, and ultimately to avoid scholarship proposals because it would funnel tax revenue away from public schools. This is a legitimate concern if you are looking to protect the monopoly of public education. The reality is that parents deserve a choice especially in cases where there are underperforming school districts. We in state government should do everything we can to empower parents, especially in low-income neighborhoods.

A legitimate question to ask is how much of taxpayer revenue is currently seen by students in the classroom? Illinois has increased school funding by 74% over the course of two decades, and we currently spend the 14th highest per pupil out of 50 states. Meanwhile, the Illinois student population grew only 6 percent, the system itself grew at a rate 12 times that of the student population. The Teachers’ Retirement System’s debt has increased to $71.4 billion. In 2016 alone, Illinois taxpayers became responsible for $8 billion in public school employee pension debt. Taxpayers are not supporting students with increasing property taxes, they are supporting escalating teacher pensions.

In his article, Mr. David Larson bemoans that private schools “take advantage” of new teachers by hiring them for lower salaries. Mr. Larson calls this “cheap labor”, and argues that this hurts the “teaching profession’s prestige.” There is no doubt that on average private schools wages and benefits are not equal to the public schools but the costs to educate per child are far less also with excellent results in regards to academic success, college placement and preparation, and scholarship eligibility. Many private schools do offer new teachers the opportunity to begin teaching but poor performing teachers can be addressed efficiently.

As a result of tenure, despite changes fairly recently in state law, most public school districts follow the process of “last in, first out”, ensuring that tenured teachers are given preference over newly hired teachers. Consequently, if you have an unbelievably great new teacher who is not tenured and staff reductions are necessary (i.e. due to lower enrollment) that could be the first teacher cut even if there is a poor performing teacher with tenure. Teacher unions also help make it very difficult to remove underperforming teachers, causing them to remain in the profession, often to the detriment of their students.

The most important question that should be asked is, what can help students succeed? Every student has the potential to achieve high levels, and every student deserves the opportunity to succeed through an educational system that works to encourage their success. Expanding school scholarship opportunities gives students the chance to attend the school of their choice, regardless of their socio- economic status.

Competition between public, private, and charter schools gives parents and students the choice to choose and ultimately creates a better opportunity for their children to academically succeed. Illinois’ highest priority must be to provide students with the highest educational opportunities possible, and not restrict which child can attend which school.

Furthermore, while many other states have embraced school choice, Illinois as in most areas is behind. We zone our kids by geographic location in public schools and that is where they go to school no matter what. Parents want the ability to exercise school choice; however, the bureaucratic system financially protects public school monopolies over offering support to parents to choose the best educational setting for their child. I encourage learning about school choice opportunities, both their successes and their setbacks, and have parents and students decide for themselves whether they want to have the choice of where they attend school.

As always, if you have any questions or comments about the topics discussed in this newsletter, or any other part of state government, please do not hesitate to contact my office at (815) 547-3436 or email me at sosnowski@ilhousegop.org. 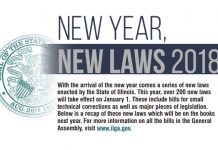