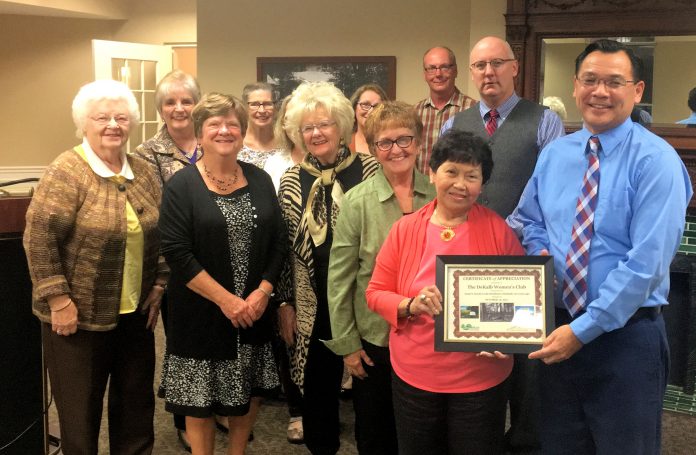 At the October Board Meeting, the DeKalb Park District Board recognized the DeKalb Women’s Club and presented them with a Certificate of Appreciation for their donation of Annie’s Woods to create a public park 100 years ago. “We are forever grateful for then forward-thinking actions that the DeKalb Women’s Group accomplished back in 1917” said Phil Young, Park Board President. “Annie’s Woods was one of the inaugural parks that started it all, and paved the way for the eventual development of the DeKalb Park District.”

Click on an image below for a larger view!

In February 1912, the DeKalb Women’s Club discussed acquiring Annie’s Woods, a 10-acre tract of virgin forest to establish a public park. It was then voted by club members to purchase Annie’s Woods according to a contract entered between Annie Glidden, Bertha Bradt and her husband Samuel Bradt and Dekalb Women’s Club. The club agreed to pay $2480 for the entire parcel. It was 4 years later in May, 1916 that the payment was made in full. On May 1, 1917, the City of DeKalb accepted the gift of Annie’s Woods from the DeKalb Woman’s Club to be used as a public park.

When the Park District was formed in 1935, Annie’s Woods Park was one of the 4 original parks in the DeKalb Park District, along with Hopkins Park, Liberty Park and Huntley Park. In 2013, Annie’s Woods underwent a significant renovation including a new playground, open air shelter, and basketball court. It remains one of the District’s jewels.