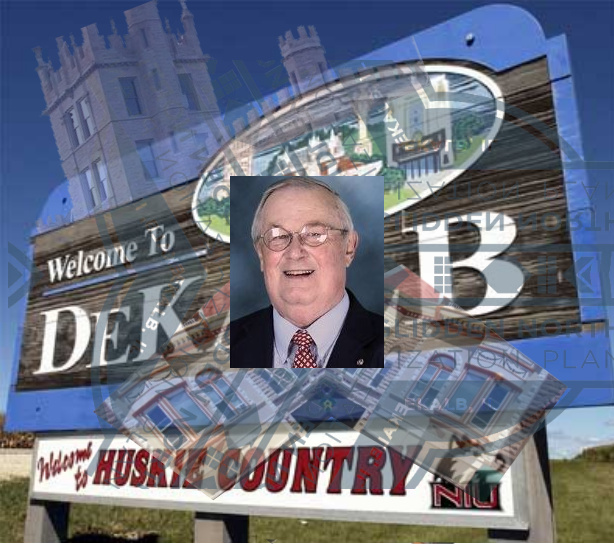 It was about a year ago this time that my wife Ging and I decided that we would heartily campaign, following the urging of many folks to run for mayor. Following holiday celebrations, 2017 was upon us and we went full-bore on doing what we felt was necessary to be successful.

Putting together a campaign team, sending out a solicitation for financial help, ordering election signs, and establishing a calendar that would prove to be busier than we ever thought. We did all these things, and with the help of so many, our campaign came to a smashing finale in April.

Since last May, I have been honored to serve as the City of DeKalb’s mayor. And, I’ve found that the “campaign” is far from over. Even though our community’s form of government officially lists the post of mayor as a part-time position, for me it has proven to be anything but that. I’ll be honest – this has been one of the most time-consuming assignments I’ve had.

Having said that, I feel good about the progress we’ve made. You’ll note I used the word we, since leading a municipal government can only be successful with teamwork. DeKalb’s major policymakers are the seven folks elected as your aldermen, comprising the City Council. We are fortunate to have individuals who are analytical thinkers, not afraid to speak their mind. For those who have attended, or watched, City Council meetings, it’s a rare session when an alderman does not make some contribution to the discussion.

While Council votes have not always been unanimous on a given issue, it’s been clear to me that our aldermen acknowledge the importance of consensus, even though their vote may have been at odds with the majority. This is healthy, and really does benefit the citizens of DeKalb. I could not be more proud of the City Council that we have in place. As a matter of fact, I have asked each and every one of them to cast a report card, of sorts, on my performance as their mayor. While I’m hoping for passing marks, I have pledged to them that I will attempt to act positively on any of their suggestions on how their mayor can be a more effective leader.

If DeKalb is to function at optimum efficiency, we need a City Hall staff to perform its duties in step with Council policy. It’s no secret that this became a point with some contentiousness during the mayoral/council campaigns. As a matter of fact, it was me who publicly stated that the “tail was wagging the dog,” a clear swipe at what many thought was staff’s overzealousness in usurping Council’s policymaking authority.

Over the past several months, this newly-constituted Council – with a new Mayor and two new aldermen – have worked hard with our City Manager in re-establishing the mode upon which the Council-Manager form of government was established. Part of that process was the recent evaluation process of City Manager Anne Marie Gaura. The extension of her contract was approved, but by a narrow vote. As Mayor, I chose to follow the lead of four veteran aldermen who voted to extend the Manager’s contract. I felt it was the appropriate thing to do, even though the 4-3 Council vote did not send a message that I would have liked to see.

During the coming weeks and months, I fully expect our City Council to take a hard look at how the City of DeKalb is structured. This will require, in many respects, different way of looking at things. Council members have indicated they not only want changes, but have pledged to get involved in making that change happen. Most notable is our immediate hands-on involvement with the FY2019 budget, a direct response to what most agreed was too late a start on the FY2018 process.

We are making progress on a number of fronts, including our acknowledgement that public safety is paramount in the minds of most of us living in DeKalb. Our police and fire departments are fully-engaged in that effort, whether that be in criminal crackdowns, parking restrictions, or building inspections.

Working closely with NIU, especially in helping in whatever ways we can in increasing student enrollment, will be a key activity during 2018. There are a myriad of ways we cooperate with the university now, and we fully expect that to continue. Among them is the planned operational merger of the VAC and Huskie Bus lines, and a renewed recognition that we need students to be more engaged in visiting, shopping, and enjoying what DeKalb has to offer.

Folks remind me that during the mayoral campaign, I mentioned that I would be “laser-focused” on economic development. Friends, that has become one of the key activities during my time on the job. Whether it be visiting retail, commercial or industrial establishments…attending grand opening ceremonies…or welcoming prospective businesses to DeKalb, I’m trying to do all I can. Increasing our community’s tax base, and creating a climate where people can make a good living while supporting their families is imperative.

Sycamore’s Mayor Curt Lang and I have become friends during our short time in our respective roles, and we have agreed to work hard in collaborating, and cooperating, on things that make sense and will benefit the citizens of both communities. While our cities are dramatically different in so many ways, we share a common geography and growth potential. And, that thought rings true, also, with the entirety of DeKalb County and our neighbors throughout the region.

These are but a few of the reflections that I have since becoming mayor, and I thank so many of you for volunteering to help in our effort. Happy New Year!