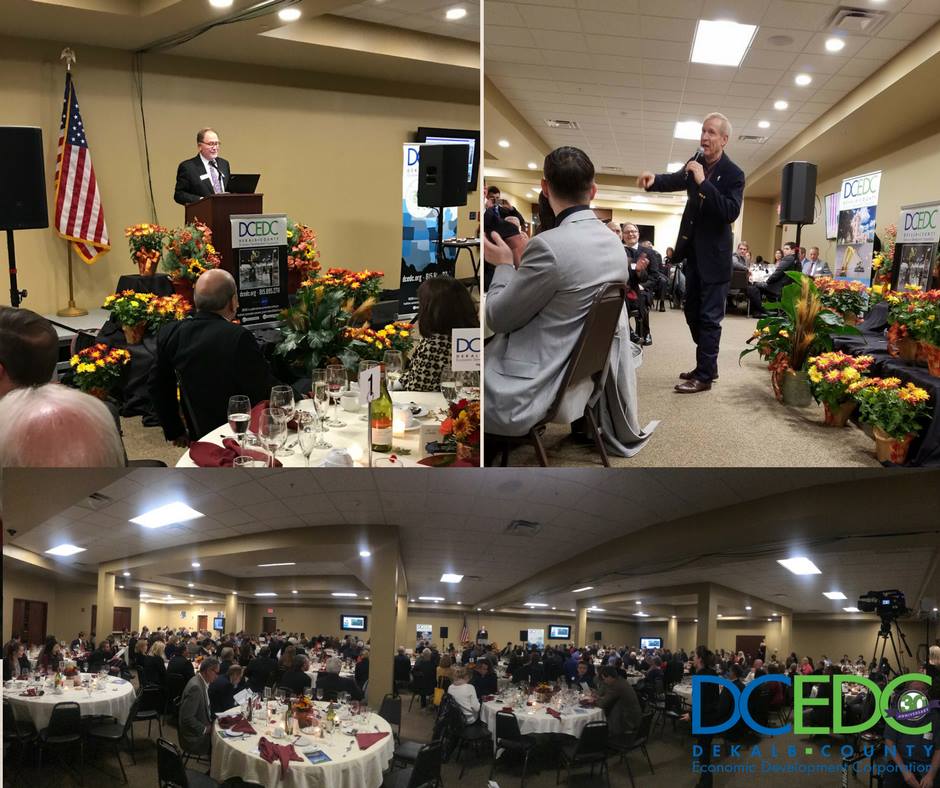 “DeKalb is a microcosm of our state’s economy,” Rauner said. “It features strong manufacturing and distribution employers like The Suter Company and 3M that coexist in the same geography with some of the most bountiful harvest land in the world. Manufacturing and agriculture: These are the foundational businesses of Illinois.”

Paul Borek, executive director of the DeKalb County Economic Development Corp., or DCEDC, said the county has worked closely with Intersect Illinois and the Department of Commerce to attract, retain and foster expansion of businesses, including 3M, Target, Ideal Industries and others.

“Over 800 new jobs have been generated in each of the past two years,” Borek said, adding that work is ongoing to promote DeKalb’s Chicago West Business Center site for additional anticipated development.

Before arriving at the dinner at Faranda’s Banquet Center in DeKalb, Rauner stopped in St. Charles to visit Bison Gear & Engineering. He also toured DeKalb Forge.

Bison Gear was founded in 1960 and is now a global supplier of power transmission equipment that employs roughly 200. In business since 1946, DeKalb Forge Co. is a maker of everything from carbon steel to nickel-based alloy forgings supplying multiple North American industries including aerospace, shipbuilding and automotive. It employs about 90 people in DeKalb and another 40 at its other Illinois locations in Cortland, Rochelle, Rock Falls and Rockford.

Rauner said both are terrific examples of the expansion and success possible when hard work is combined with a supportive business climate.

As noted in his speech, the governor is working to implement common-sense reforms to improve the climate for business expansion in the state. By bringing workers’ compensation costs in line with national averages, for example, the state could stimulate enough business growth to produce an estimated 30,000 new jobs by 2030, as well as increase overall personal income and gross domestic product by billions of dollars.

“The DCEDC welcomes Gov. Rauner’s focus on business and economic development,” said DCEDC Board President Chuck Kaiser. “It is important to the success of our county and our state.”.