On 12/27/17, at approximately 4:04 pm the Sycamore Police Department responded to the BP Petro Station at 1615 DeKalb Ave. for a reported armed robbery. Officers arrived and began searching the area for a white male in his late 20’s to early 30’s approximately 5’10
to 6′ with an average build wearing a dark hooded sweatshirt, a multi-colored baseball cap, sunglasses and blue jeans. The male suspect left on foot with an undisclosed amount of US currency. A black semi-automatic handgun was displayed by the suspect and no injuries were reported. The Sycamore Police Department was assisted by the DeKalb County Sheriff’s Department, the Genoa Police Department/K-9, and the DeKalb Police Department while searching for the suspect.

Sycamore Police are looking to identify this subject in reference to the Armed Robbery on 12/27/17. Anyone with information please contact the Sycamore Police Department and Crime Stoppers rewards money is available. 815-895-3435. 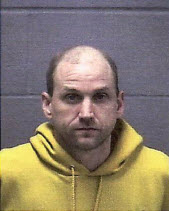 During the investigation of the Armed Robbery, investigators canvassed nearby businesses and obtained additional video which provided more detailed pictures of the suspect and the vehicle. A still photo from one of the videos was disseminated to local media outlets, put on social media, and provided to law enforcement agencies. Law enforcement collaboration in conjunction with several tips from the public led to the suspect being identified on 12/29/17 at approximately 5:30 pm as Michael J. Wesbrock, 38, of the 400 block of South Street, Hampshire. After identifying Wesbrock, Sycamore detectives learned the Kane County Sheriff’s Office had contact with Wesbrock on the day of the robbery for an unrelated incident. Kane County deputies were able to locate Wesbrock athis residence at approximately 9:40 pm on 12/29/17 and he was taken into custody without incident. The DeKalb County Sheriff’s Office transported Wesbrock to Sycamore Police Department where he was interviewd by Sycamore detectives and subsequently charge with Armed Robbery. The weapon displayed during the robbery has not been recovered yet.

“The diligence of the detectives and the support provided by the DeKalb Police Department along with the DeKalb And Kane County Sheriff’s Office were the keys to identifying the suspect and taking him into custody” said Chief Jim Winters. “This case was a good example of assistance from the public combining with solid inter-agency cooperation: Winters added.

Wesbrock was transported to the DeKalb County Jail to await a bond hearing. For further information, please contact Commander Mike Anderson at 815-895-3435.

The public is reminded that all charged with a crime are innocent until proven guilty in a court of law and charges are merely accusations.