With the meeting tonight to plan for the 2020 DeKalb County elections, I thought this might be a good time to revisit the issues that occurred at the NIU voter registration center during the 2018 General Election.

Carolyn Morris, who was running for DeKalb County Clerk, had a test on the NIU campus from 2:00-3:15 p.m. and ran into Court Schuett and Liliana Orozco, two other DeKalb County Democratic candidates, outside the Holmes Student Center encouraging students to register and vote. (They insist that they were not campaigning, just trying to help students vote.)

They noticed some students coming back out of the student center because the line was too long and they didn’t have time to wait in it. Upon further inspection, Morris said that she was in “shock, awe, and disbelief” about the length of the line that snaked through several rooms in the Student Center (see video below).

According to Morris, there was a lot of confusion among students about what forms of I.D. would be accepted and where students were registered to vote. So Morris, Schuett, and Orozco went through the line to make sure that everybody was in the right spot. They ran into one woman who had waited 2 1/2 hours, only to find out that her polling location was Barsema Hall.

“It was not entirely clear what the line was for,” said Morris. 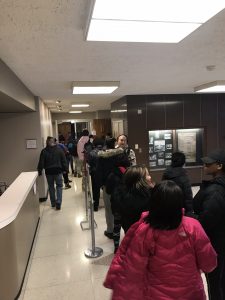 According to Morris, there was polling information posted by a door, but the door was two hours into the wait. And the posting was for early voting and did not explain what forms of I.D. would be accepted for registration. She said most students did not know that their student IDs would be accepted.

“We understand that these problems could totally happen,” said Morris. “We had record turnout.”

In fact, the 89% of registered NIU students (nearly 1000) who voted in DeKalb County was over six times higher turnout than during the 2014 mid-term elections, when only 14% of registered student voters (78 total) cast ballots.

But what really angered Morris was the response by incumbent DeKalb County Clerk Doug Johnson to the situation.

“He just won the election,” said Morris. “All he had to say was, ‘Oh, we’ll work on it,’ but just his attitude suggesting that it doesn’t matter, that’s disgusting to me—suggesting that he’s already going above and beyond to meet the needs of the students.”

She further took issue with Johnson’s statement, as quoted in the Daily Chronicle, that DeKalb County is the only place in the state that offered same-day voter registration for students. She called that either a “blatant lie,” or proof that Johnson was so inept at his job that he didn’t know the voting requirements around the State of Illinois. 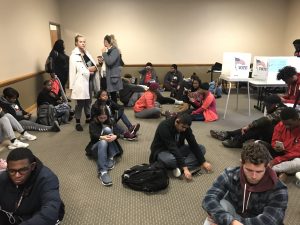 With equal or even greater student turnout expected for the November 2020 Presidential election, many people are wondering what should and will be done to avoid the same situation that occurred at NIU in 2018.

Some local residents have taken issue with the fact that so many students are voting in DeKalb during these big national elections, rather than in their hometowns (either in person or by absentee ballot). Republicans, especially, are concerned that a large student turnout could possibly impact some city and county elections, where most students are probably not as informed about the candidates and the issues. That is currently a moot discussion, however, as students are still legally able to register and vote in DeKalb County, even if it is not their permanent residence. They must, therefore, be accommodated.

Some suggestions that have been made to reduce election day lines and/or make it easier for people to vote include electronic (online) voting, automatic voter registration, increasing the number of polling places, increasing the staffing at existing polling places, and making Election Day a national holiday. Some of those ideas may be discussed at tonight’s DeKalb County Election Meeting.