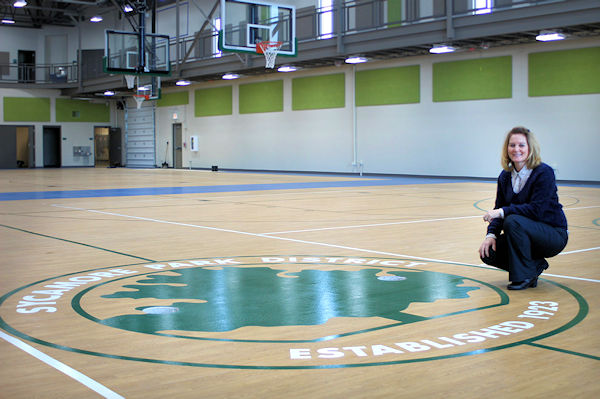 Over the last three years, the building of a new Community Center has required Sycamore Park District staff to anticipate and navigate many transitions. Now, in the homestretch, within two months of opening, staff members find themselves in a transition atypical of such a project, this late in the game. Nonetheless, they are approaching it the best way they know how – with compassion, teamwork and dedication to the common goal.

When Meghan Jourden-Messerich, current Superintendent of Recreation, announced her resignation as of March 2, 2018, Daniel Gibble, Executive Director, put the wheels in motion to have the position filled quickly and with someone who could pick up where she would leave off. Through a swift, but thorough application process, Theresa Tevsh vastly proved her ability to take on such a challenge and as of February 12 has joined the team as the new Superintendent of Recreation. Meghan has been with the District since July 2017. Her resignation was a personal decision stemming from an opportunity her husband received with a company in South Carolina.

As Superintendent of Recreation, Theresa will oversee recreational facilities, services and initiatives throughout the District. With the new Community Center set to open mid-April, she is coming in at a very exciting, yet very hectic, time. Daniel Gibble says, “We will miss Meghan, greatly, but understand that life happens and wish her all the best in South Carolina. Theresa is able to overlap a couple with weeks with Meghan before she leaves, so I am confident that this fortunate opportunity along with her enthusiasm for recreation programming, and the extent of her experience will make this a smooth transition. She’s already house hunting in the Sycamore area and is prepared to hit the ground running!”

Opening a new facility is nothing new to Theresa. She has been a part of start-to-finish projects for the Village of Richton Park’s community center as well as a new splashpad at the Oakbrook Terrace Park District – recipient of the Illinois Park and Recreation Association’s Outstanding Facility and Park Award. Theresa is a graduate of the University of Wisconsin – LaCrosse where she earned her degree in Parks and Recreation Administration. She is also a Certified Parks and Recreation Professional (CPRP) having worked in the field for 23 years at both Park District and Municipal Government agencies.

Special events are Theresa’s favorite part of the job as it forges community ties and gets the entire staff involved. Theresa believes in the teamwork approach for everything – that includes family, work and community. She looks forward to embracing the opportunities of the District’s new amenities and programs to serve Sycamore residents, complement the community culture and increase the area’s economics through travel and tourism.

Theresa is “almost” an empty nester with her oldest son recently graduating from Monmouth College and her youngest just starting college at Eastern Kentucky University. She and her husband are looking forward to moving to the Sycamore community to put some “miles” on the bike trails, Kishwaukee River and enjoying twilight golf! Maybe there will be a triathlon planned in the near future!