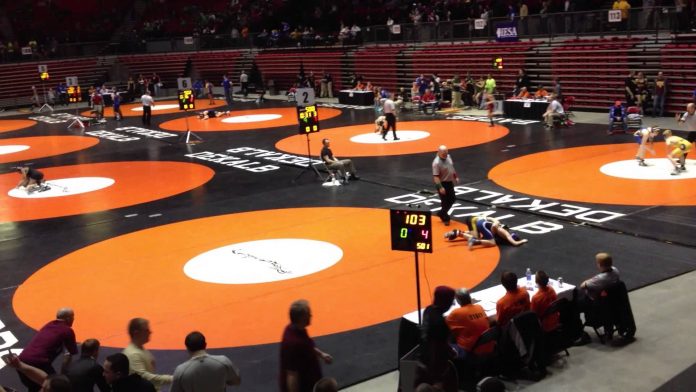 The NIU Convocation Center is hosting the Illinois Elementary School Association (IESA) State Wrestling Tournament for the 16th consecutive year on Friday and Saturday, March 9th and 10th. The NIU campus is the site of the event for the 20th consecutive year. The tournament in its 39th year was first held in DeKalb at Chick Evans Fieldhouse in 1999.

A field of 456 wrestlers from 146 schools across the state will compete in the IESA state wrestling finals featuring a total of 703 bouts over the two days with competition in 19 weight classes.

A listing of individual qualifiers by school is available at the following link:

Doors open at 2:30 p.m. Friday and bouts will begin on eight mats at 3:30. The preliminary round and first round bouts in the championship bracket will be conducted Friday. Doors open at 8:00 a.m. on Saturday and wrestling resumes at 9:00 a.m. Semifinals are set to begin Saturday afternoon at approximately 12:30 p.m. Championship bouts are scheduled to begin at 5:00 p.m. Championship bouts will be conducted simultaneously on two mats.

Single-day tickets are priced at $10.00 each day for high school students and adults. Price of single-day tickets for senior citizens (age 62 and above) and students in grades K-8 is $5.00 each. Children below kindergarten are admitted free. Advanced ticket sales for the state finals at the NIU Convocation Center are now available through Ticketmaster. Those who purchase their tickets in advance will bypass the ticket purchase line and simply proceed to the admission door. If you want to purchase tickets in advance simply go to www.ticketmaster.com, type in NIU Convocation Center and then find the IESA Wrestling Finals link. The standard Ticketmaster surcharge will be applied.

This year’s Grand Marshals are: Earl Brooks, the long-time coach in the Valley View school district at Romeoville Lukancic and Romeoville Martinez; Steve DeNeut, the highly successful coach for the New Lenox wrestling program; and Paul Vittone, a dedicated coach and official from DeKalb who just retired from officiating after 30 years. Vittone officiated the IESA state finals in 2010 and 2011.

The DeKalb County Convention and Visitors Bureau anticipates more than 5,000 visitors will attend this two-day event. The economic impact for the area is estimated to be $300,000.