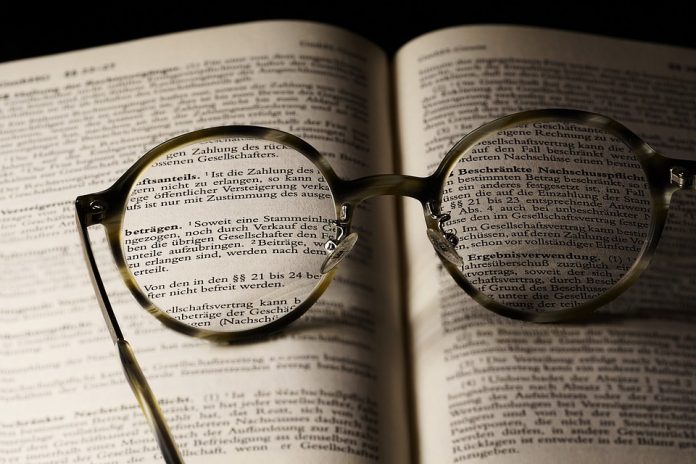 Thanks to recent discussion of DeKalb Public Library’s plan to pay back taxpayers for emergency help with its expansion project, much of DeKalb knows about DKPL’s $4.5 million bank loan to keep construction going during Illinois’ budget impasse.

Not many know about the bank loan of $3 million, but maybe you should. Here’s why:

–
How it came about
Though the amount evolved during discussions about how best to match the construction grant locally, private donations were always part of the funding mix, which also included bonded debt, TIF funds, and library reserves. But when the Illinois State Library notified DKPL of the grant award, the library board of trustees found themselves up against a June 2013 deadline to place the entire matching share in the bank — and the capital fundraising campaign had barely begun. The board took out a loan for $3 million payable in 2015, intending to pay it back with proceeds of the campaign.

By the end of the first loan term, however, the campaign had not picked up enough steam to pay it off, and the board extended the loan for another two-year term.

Meeting minutes indicate the donation total reached $2.5 million in the summer of 2016, and the executive director reported another $400,000 in pledges. Nevertheless, the minutes of a board meeting in October flatly stated, “There is a $1,200,000 shortfall in the philanthropy account.”

The minutes do not explicitly account for the shortfall, though financial records suggest that lagging collections of pledges, monthly interest payments, and fundraising expenses were at least partly to blame. At any rate, library trustees faced the beginning of 2017 still owing half the principal, so they renewed the loan for another year.

Payment was due March 17, 2018. DKPL executive director Emily Faulkner told me in an email that the board is exploring its options.

What the budgets say
This is the library’s anticipated debt for 2018, as shown at DKPL’s website:

The above reflects what’s owed for this year on the debt certificates for the land purchase, payments that must be made on the general obligation bonds, and the emergency levy of $500,000 that would have gone toward the $4.5 million line of credit if the rest of the state grant had not arrived.

The $3 million loan is not mentioned. It is not a part of this budget or any other budget going back to its origin date in 2013. You would not know about it unless you read the city’s comprehensive annual financial reports (CAFRs), which include audited reports.

So how do they pay on the loan, you might ask? The library receives donations through its capital campaign that are deposited into a checking account called the Philanthropy Fund, and these are the funds used to pay principal and interest. In 2017, the library agreed to make a $100,000 principal payment and the monthly interest payments averaged roughly $5,000 per month. 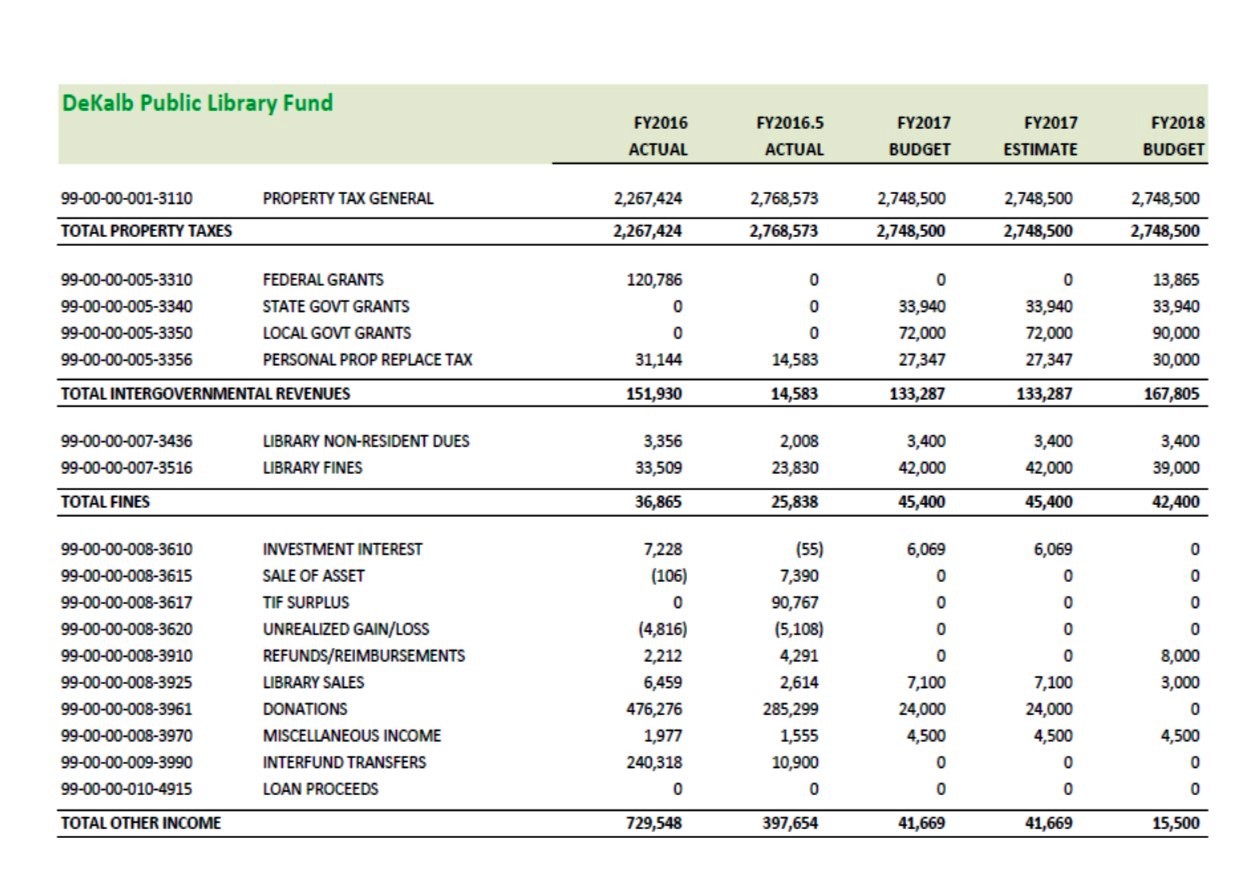 It doesn’t look like donations covered the loan payments, but the library actually took in more than $300,000 in 2017, and was able to make two principal payments. And this year, DKPL has received almost $50,000 in donations so far.

The question is whether the library can continue to bring in donations and eventually pay off the loan.

That’s in addition to the question of why they kept it off budget in the first place.

“Silly laws”
Failing to project budget revenues is not a new trick. Check out the 2008 column below. 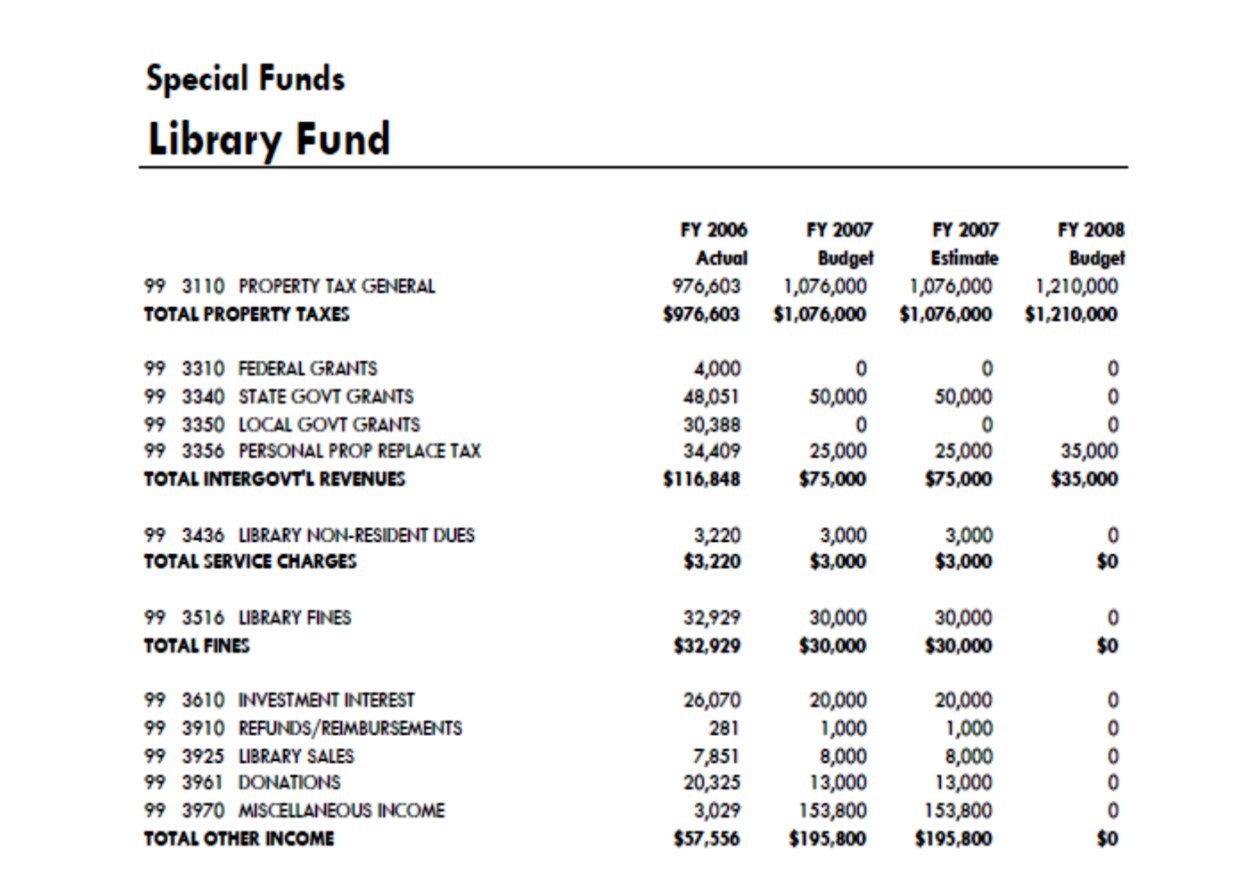 This is one way our library secretly, and probably unlawfully, began accumulating funds for the expansion project in the first place.

Mac McIntyre of DeKalb County Online has written extensively about the scofflaw ways of the DKPL board of trustees when it comes to the library expansion project, including a quote from a trustee who called the requirement for city council approval of the expansion plan a “silly law.” It’s due to McIntyre’s persistence that a judge ordered, via a 2010 consent decree, that the DKPL board follow the Open Meetings Act. It was a problem a decade ago and it’s still a problem today. As an example of more current issues, here’s a piece of the April 12, 2017 meeting minutes:

c) Loan Repayment. [Library board president Virginia] Cassidy reported that she had gone to First National and signed and [sic] extension for one year on both loans. Along with paying the interest on both loans, the officials at bank wanted the library to reduce the principal of the $3 million loan by $100,000 each year, and the principal on the $4.5 million dollar loan by $300,000 each year. Payment on the $3 million loan will come from funds in the philanthropy account and pledges. There is money in the Short Term Loan account to pay the $300,000 now. Richter moved and Johnson seconded to pay the $300,000 on the $4.5 million loan. Roll call was taken. Ayes: Kirts, Richter, Vander Meer, Massey, Johnson, Mitchell, Cummings, Cassidy. Nays: None. Absent: Garcia. Motion approved.

In February 2017, the board decided to hold off on deciding whether to extend the loan. By the time of the April meeting as described above, the extensions were a done deal. The Open Meetings Act says that a public body must take final action in an open session, but nothing in March minutes indicates the library board took a vote in open session on the extension.

Also, DKPL’s bylaws say that the board controls all expenditures, and that they are authorized by a roll call vote. But the meeting minutes suggest Cassidy negotiated terms and extended the loans on her own authority.

Recommendations
DKPL’s executive director has worked at this library for barely a year. None of the above can be laid at her feet. Faulkner says the board plans to amend its budget this year, and she will be sure to list the debt properly during the amendment process. So far, so good.

The board is a different story. The mayor should replace trustees with proven track records for ignoring rules they don’t like, the sooner the better.

And a good hard look at spending on the expansion might be in order.