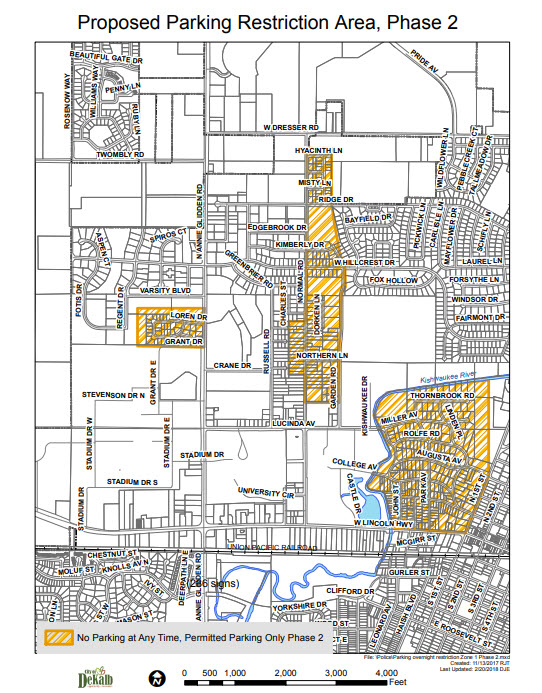 The Safe Streets Initiative is a multi-faceted program designed to enhance public safety
in neighborhoods near or adjacent to Northern Illinois University. The Safe Streets
Initiative is comprised of three components; proactive policing strategies, enhanced
parking regulations, and establishing “safe routes” in the affected neighborhoods. The
proactive policing strategies have been in effect for several months and through a
combination of community-based and intelligence-driven policing the reduction of crime
is evident. Phase Two of the Safe Streets Initiative is on the agenda for the regular City
Council meeting on Monday, March 26.

Phase Two establishes resident parking areas in all of the other areas marked as
orange on the attached map. This is intended to preclude the displacement of vehicles
from Phase III into adjacent residential neighborhoods, and also to prevent the deterioration of public safety conditions in the College/John Neighborhood and North Fifth Ward. Similar to Phase One, resident parking areas would require a permit.

Police Department staff began a door to door canvass in the affected neighborhoods on Monday, March 19 to notify residents of the pending ordinance and to hear concerns that residents had. Staff will continue the neighborhood canvass this afternoon. Residents who would like to share their concerns can also submit input via the Safe Streets landing page. To learn more about the Safe Streets Initiative, scan the QR code.