DeKalb could join that evidence-based list to support the study’s conclusion. In 1985 the Central TIF District was born and it once held the distinction of being the largest one in the state. It was amended ten years later with a funnel that led from the central district up Sycamore Road to the County Farm property. That helped make the development of the County Farm and Annex property into what is now the Target shopping center and much of the Walmart shopping center across the road possible. It helped finance the demolition of the old Post Office and made the Walgreens development possible. But some downtown merchants moved to the bigger parking lots on Sycamore Road and elsewhere and the deterioration in the old business district accelerated.

When the Central TIF District was extended in 2008 the downtown became the target of funding and much of that was in public facilities. Sidewalk and underground infrastructure were replaced while IDOT updated Rte 38 (Lincoln Hwy). Second, Third and Locust streets were revamped and $12 million was spent to replace the parking lot at 2nd and Locust with a brick paved parking lot but with fewer spaces. The Egyptian Theatre, the old 1st National Bank (donated to the DeKalb Park District), the library, and the Ellwood House receive(d) substantial TIF funding.

There were incentivized private investments through the TIF program. Mel and Debbie Witmer made major investments in refurbishing and repurposing three downtown buildings into ‘uptown’ bar and grill restaurants (O’Leary’s, Filo Spinatos/Hometown Sports Bar and Tapalaluna). Bill and Joy McMahon converted the old A&P store to Faranda’s Banquet Center. The fronts of downtown buildings were painted, Eduardo’s and Rosita’s expanded and outdoor dining patios were installed. More recently Cohen Barnes bought and refurbished the former Moxie’s building into his corporate headquarters for SunDog IT. John Pappas acquired and demolished the Otto’s building to build the all-new Cornerstone of DeKalb and is refurbishing/repurposing half the block across the street.

At one time and on one plan $6 million in TIF was a placemark to abate developer’s interest on what was proposed at what was known as NB&T Square. Shodeen, the developer, made a sizeable investment into DeKalb in acquiring the property and in demolitions but he could never give the City what it wanted — a hotel — and get what he wanted — apartments — approved. So the placemark disappeared. For a while at least.

That’s a lot of money invested. Public and private. There is a real buzz building for downtown DeKalb. But there are also a lot of empty storefronts on the bigger parking lots on Sycamore Road. There are some ten-year-old commercial spec buildings yet to have a first tenant. There’s plenty of commercial vacancies on West Lincoln Hwy and Annie Glidden, too. Ditto East Lincoln Hwy and down South Fourth Street. 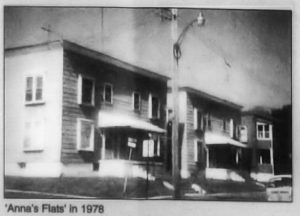 All but forgotten was a $2 million TIF investment that removed the old, blighted, congested and troublesome Haish Flats and turned it into the Pond-Fisk neighborhood with 15 new single-family homes.

That’s relevant because DeKalb is long overdue to address those same conditions, or worse, in the old congested Greek Row neighborhood. Actually, by the time the Pond-Fisk neighborhood was complete, the shooting death of Jason Manley took place in 2001 and DeKalb has been fretting but not addressing old Greek Row since.

So it’s understandable that patience with the Downtown Revitalization Plan is wearing thin as funding is needed elsewhere throughout the city. There’s an if not for TIF wishlist that remains for downtown. A city hall, expansion plans for the Egyptian Theatre, perhaps a firing range at the new police station and maybe a hotel require too much funding than the expiring TIF can generate.

A new TIF District that runs from the police station to the public works building at 11th and Oak St. is proposed and in the works. The city council just approved a TIF registry list for this new proposal. That doesn’t commit the council to the new TIF but it’s puzzling why a TIF registry list wasn’t created for the Annie Glidden North project. Just in case.

Sixth ward alderman Mike Verbic suggested that discussing and approving just the one registry did kind of sort of commit at least a lot of staff time and soft cost to the proposed new TIF district.

It certainly has that odor.