After a four week break for the primary election, the Legislature returns to Springfield this week to consider hundreds of bills. The Speaker scheduled only 16 session days in the first 3 months of this year and 33 days in the next two months.

For a bill to continue in the process toward passage into law, it must be voted out of committee by Friday. That means debate will be limited on each bill and committees will be pressured to pass along some bills that should be held for further amendments and input from groups affected by the legislation.

This schedule is one of the reasons that bad legislation is often passed into law and people may be surprised by the unintended consequences of a new law. Nevertheless, the process does help prevent some ill-conceived bills from being passed.

I will comment on many of the bills as they move through the process in the next few weeks. Of course, always feel welcome to share your views on legislation with me by contacting Jesse in my district office or Shelly in Springfield.

The long awaited extra funding for education will start flowing to school districts on Tuesday. The Comptroller said the $395 million will be divided among six payments and distributed by July. Schools in my legislative district will receive nearly $8.6 million in additional funding. The amount each district will receive depends upon the needs of their students and their currently available resources. The complete calculations for the funding formula by school district can be found on ISBE’s website here.

According to the formula, schools in my legislative district are short about $59 million of what they need to provide an adequate education while all districts across the state are short about $7.2 billion. The Indian Creek School district has over 100 percent of its adequacy target while most local districts are 57 to 73 percent funded.

The formula identifies the different types of staffing recommended for the needs of the students in the school, salaries for different types of staff and then adjusts the figures based on the regional cost of living. Districts are still free to determine staff hiring, salaries and other services but they are encouraged to look at the 27 practices in the formula for producing the best student outcomes.

The five House appropriation committees have been holding hearings on various expenditures in the state budget for several weeks. When I first joined the legislature more than a dozen years ago, the budgeting process always began by determining available revenue and using that as a spending target.

The Commission on Government Forecasting and Accountability (COGFA) still starts from the revenue side in developing its three-year budget forecast for the legislature. Their report which was released in recent weeks takes into account the State’s economic opportunities, expenditures, threats to anticipated revenues, and concludes with potential three year budget scenarios. The full report can be found here.

The legislative agency estimates that revenue will drop slightly from FY2018 and then grow by 2 to 3 percent in the next two years. Part of that revenue growth is dependent upon convincing companies to invest in Illinois, expanding the sales tax to more items, and legalizing and taxing recreational cannabis.

On the spending side, COGFA said that reducing the interest rate paid on unpaid bills and paying bills in full were major opportunities for balancing the budget. The agency noted that continuing to limit spending to the rate of income growth was key to eliminating unpaid bills. They said the state in recent years is headed in that direction.

The Illinois Department of Transportation has decided to restore about $17 million of cuts previously made to county and local road programs. The department originally cut $50 million during confusion about the FY2018 budget. The funds released in January have been directed toward counties, needy townships and high growth cities.

The Governor’s Office of the Bicentennial recently launched a program to encourage students in 4th thru 8th grades to pursue Science, Technology, Engineering and Math (STEM) careers.

The program will provide training for middle school teachers in 25 districts using a unique curriculum adopted from the Illinois Math and Science Academy. The program is privately funded by Abbott and Wintrust, Boeing, Ingredion, and Motorola.

This initiative is meant to focus on the future of Illinois during its bicentennial year by creating a lasting impact on students. Schools will be chosen by a selection committee based on the needs of the school. The application can be accessed here but is due by April 13. 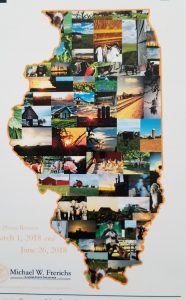 The Illinois Treasurer’s office has launched a photo contest to showcase Illinois agriculture and his Invest in Agriculture Program. The “Cream of the Crop” Photo Contest is for youth ages 8 to 18 from around the State to submit their photos that depict their vision of agriculture in our state.

Contest winners will have their work featured on marketing materials for the Ag Invest Program, and displayed in the capitol and at the state fairs. They will also have lunch with Treasurer Frerichs.

Through Ag Invest, the Treasury partners with approved financial institutions to provide qualified farmers and agriculture professionals loans at below market rate interest to start, expand or add value to their farm operations.

You can read more about the contest, and the Ag Invest Program here.