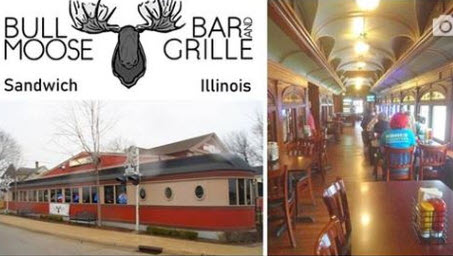 Bull Moose Bar & Grille, in Sandwich, IL is hosting a Meet and Greet on Wednesday, June 13th from 5:30pm to 7:30pm. The Pullman Car is no stranger to politics, this charming dining car, number 4438 was build by the Pullman Palace Car Company in 1893 and made its debut at the Chicago’s Colombian Exposition.

The Isabella escorted President Roosevelt from coast to coast from 1900 through 1913. Upon campaigning for the 1912 presidential election, Teddy Roosevelt defected from the Republican party and started the Progressive party. On the campaign trail one day while giving a speech from the train, Teddy was the victim of an assassination attempt and was severely wounded. Despite a bullet in his chest, he stood his ground and finished his speech. When taken to the hospital, Teddy declared: “I am tough as a bull moose! I will continue this campaign.” This statement became the origin of the name for the Bull Moose Bar & Grille.

The Isabella was moved in 1934 to its present location in Sandwich, IL and opened as a small diner with its entrance on Route 34. The brass hooks are the original hooks that held the President’s of the United States hat, since then, many customers and friends have hung their hats there also.

Amy Davis for State Representative in the 90th District,
http://amydavis90th.com/

and David Simpson for State Senate in the 45th District.
http://www.simpsonforillinois.com/